One of the biggest misconceptions which is avidly promoted by the Holocaust storytellers is that there were a large number of German concentration camps which had been set up specifically with the purpose of gassing Jews and other people. This view is still widely held and repeated by the media ad nauseam, so it comes as a shock for many people unfamiliar with the topic to discover that it is claimed that there were only six camps which were designated as “extermination camps.”
Below: A map showing the location of the most famous Nazi concentration camps. Initially, it was claimed that all the camps were “death camps,” but nowadays it is claimed that the only “extermination centers” were located in Poland. 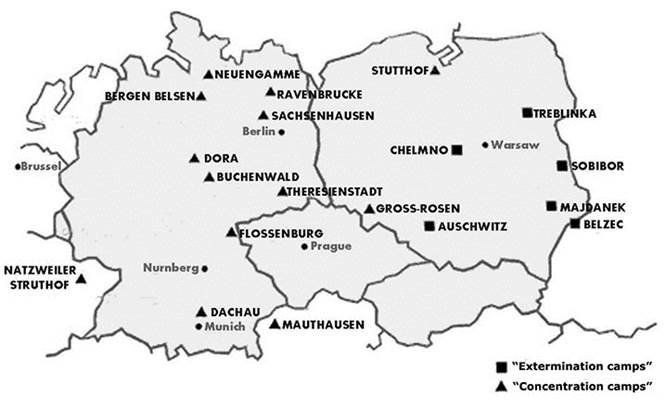 These camps are, in order of their infamy, as follows: Auschwitz–Birkenau, Treblinka, Sobibór, Belzec, Majdanek (Lublin), and Chelmno.
All these camps, bar Chelmno, were located in what was then occupied Poland, called the Central Government under German administration. (Chelmno, located near the city of Lodz, was also in Poland in 1939 but for the duration of the war was incorporated into Germany. It was returned to Poland in 1945.)
The other well-known camps, such as Bergen-Belsen, Dachau, Sachsenhausen, Buchenwald, and Ravensbruck were located inside Germany’s borders. Although it was claimed at the end of the Second World War that gassings had taken place at these camps as well, the allegations were quickly dropped as the evidence was completely lacking.
The “extermination” story then focused on the camps in Poland, which, fortuitously hidden from public view by the Iron Curtain and Soviet control, could be embellished as time went on. In this way, it comes as another shock for people unfamiliar with the topic to hear that many of the “gas chambers” and installations which are on view today at the “extermination camps” are in fact “reconstructions” built by the Soviets after the war.
For many years, this shocking fact was concealed from the public, but is now freely admitted to by the museum authorities at the camps, as any person visiting the sites can ascertain for themselves.
The revelation that there were “only” six “extermination camps” cast even further doubt upon the ability of these limited number of facilities to hold, murder, and dispose of literally millions of persons.
Furthermore, it is claimed that the “gassings” occurred in a period of little more than two years, from 1942 to late 1944. Considering that the “Six Million” number is a figure which is higher than the individual populations of at least forty nations in the world today (including Ireland, Norway, New Zealand, Togo, Costa Rica, and many others), the impossibility of murdering millions in “only” six camps in little more than two years should, by itself, refute the mass extermination story.