CHAPTER 8: THE PSYCHOLOGY OF CONFESSIONS

Section 44: Why Would Anyone “Confess?” 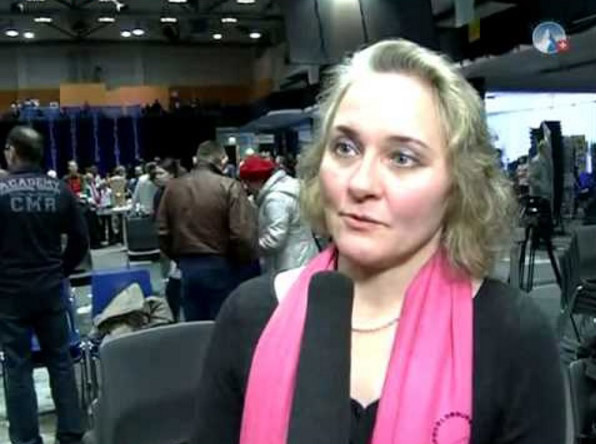 In a climate where one will be sentenced to prison just for saying that the Holocaust is untrue, is it any wonder that the accused on trial for alleged war crimes would “confess” to the existence of “gas chambers” but then try to claim that they were personally not involved?
This is in fact, what many (but not all) of those put on trial did.

It is often claimed that a “confession” by a former SS man, Franz Suchomel, made in the 1985 documentary film Shoah (directed by the French Jewish producer Claude Lanzmann) “proves the existence of the Treblinka gas chambers.
There are two aspects to the Suchomel “confession” which bring it into question, namely the technical aspects of Lanzmann’s film, and secondly, the factual details of the “confession”.
(a) Technical aspects: Firstly, Suchomel is quoted in the film as asking Lanzmann not to use his name or attribute anything he says to him. Lanzmann told the New York Times (October 20, 1985, page H-17) that the interview was secretly filmed with a single camera hidden in a canvas bag held by a female assistant. This, Lanzmann explained, was the reason why the Suchomel interview is of poor black and white blurred quality—as opposed to the rest of the movie, which is all in sharp, clear color.
In actual fact, the clip showing the “confession” is not even original film, but was filmed off a TV screen, as can be seen by the characteristic horizontal lines and flicker of the filmed interview (caused by a difference in the scanning frequency between the TV and the camera making the film).
It is highly suspicious that Lanzmann would record such a supposedly important interview by filming it off a TV screen when he would have the original film material to hand. The only potential explanation for this would be that tampering is far less easy to detect in a “poor quality” film than raw original material.
In this regard, a viewer of the film will also notice that while the image quality of Suchomel is extremely poor, the sound quality is perfect, something which is out of step with the overall production.
It is strange that the “interview” with Suchomel is the only part of the entire nine-and-a-half hour Shoah film which is blurred, indistinct, and so fuzzy that it is nearly impossible to even positively identify the person being interviewed.
Most importantly however, the interview with Suchomel was clearly done with more than one camera—directly contradicting Lanzmann’s claims in the New York Times . A stationary, hidden camera in a bag would only show one angle of a “secret” interview—but instead, as can be seen from the screen shots below, there are at least four different camera angles, each taken at differing focal lengths and perspectives—something that would be impossible with just one “hidden camera.”
In one scene, the camera shows Suchomel actually standing next to a display board allegedly showing the Treblinka camp layout, and holding a pointer stick picking out different locations in lecture style—an arrangement which is obviously highly unlikely for an interview which was supposedly not filmed.
Below: The Suchomel “confession” in Claude Lanzmann’s Shoah film: made with at least four different camera angles, and not just the “one hidden camera in a bag” as claimed by the film producer. Note also the distinctive distortion and horizontal stripe caused by filming off a TV screen. In fact, the curvature of the screen can be seen in the top left hand side of the first image.
Camera angle 1: Set up behind Lanzmann (left) and Suchomel (right). 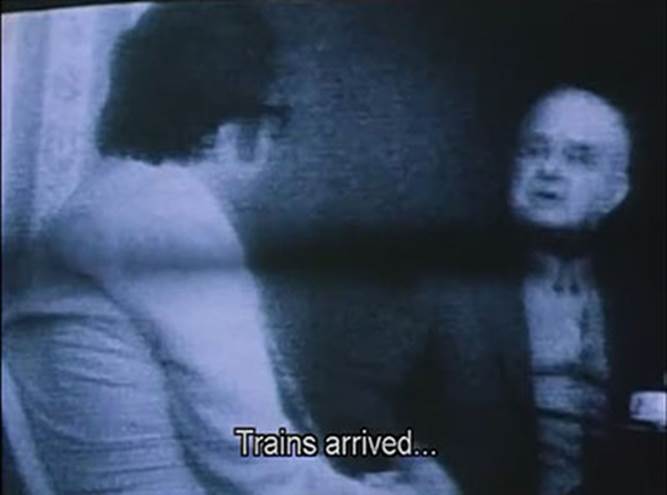 Camera angle 2: Suchomel standing up, lecture-style, holding a pointer next to a handily-set up board with a supposed map of Treblinka—an unlikely arrangement for an interview that was not even supposed to be filmed. 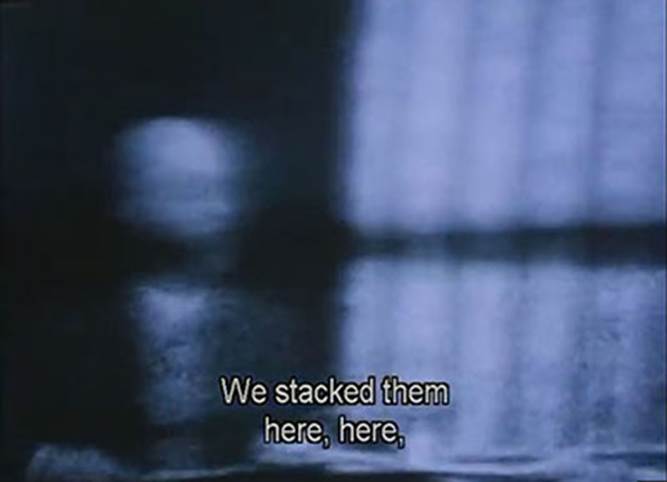 Camera angle 3: Suchomel and the “lecture board” –supposedly not to be filmed. 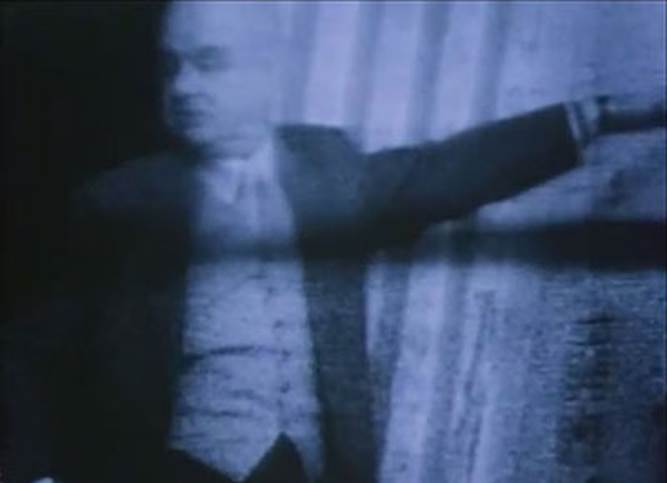 Camera angle 4: The camera moves to a few inches away from the “lecture board.” It is impossible, as Lanzmann claimed, for one camera, hidden in a bag, to have produced all of these camera angles. 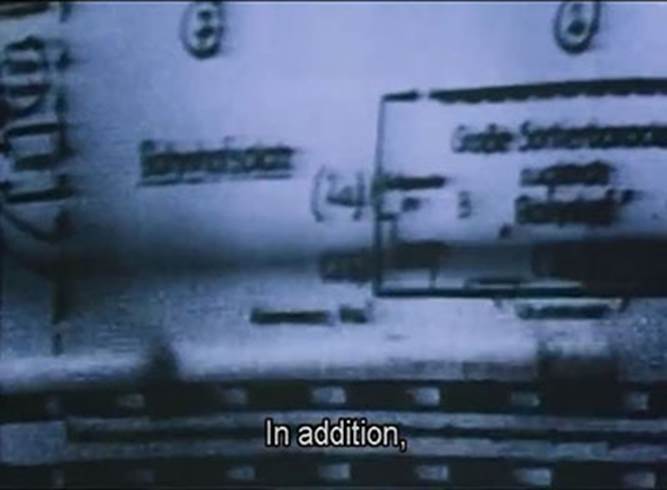 There are other physical anomalies in the “confession”: although the viewer is expected to believe that Suchomel was not aware of the “hidden” camera in the bag, more than once he turns his head and looks directly into the camera.
However, when he adopts his (standing up) lecturer mode, and taps on the set-up board with the Treblinka map, the camera moves in to only a few inches away from the board, and clearly shows his pointer stick.
It is far-fetched to believe that anyone holding a “hidden camera in a bag” could hold it so close to the board under such circumstances without being obvious.
(b) Secondly, it is clear from Suchomel’s own words in the film—presuming that the film is genuine (and as the facts outlined above show, there is good reason to doubt that)—that there are serious errors in his memory and his recounting.
Firstly, it should be borne in mind that Suchomel had been arrested and tried during the 1965 Treblinka Trial at Düsseldorf. At that trial, he confessed to being in charge of or organizing the tailor shop at Treblinka.
In line with the (already outlined above) common defense tactic used by the accused of not denying the “mass murder” program—which is illegal under German law anyway, and would have therefore only landed him in even further trouble—Suchomel only claimed that he had had nothing to do with it.
In a superb example of how this defense tactic worked, Suchomel was only sentenced to six years in jail—and released just over two years later, in December 1967.
This by itself was a sure indication that there was indeed no direct evidence linking him to any “gas chambers” or “mass murder program” at Sobibór.
In the Lanzmann “confession”, Suchomel is quoted as specifically saying that he only saw the “gas chambers” at Sobibór once during the entire time (August 1942 until late October 1943, a period of more than a year), that he was there.
His account, as contained in the Lanzmann confession, is typically vague, and follows precisely the already completely discredited—and as outlined above, physically impossible Holocaust Storytellers’ version of mass gassings in minutes, bodies falling “like potatoes” and then mass cremations in a tiny area of space, with no provision for fuel—or even a single crematorium!
It is clear from this narrative alone, that even if Lanzmann did not tamper with the fuzzy film “interview”, all that Suchomel said was the typical “do-not-deny-it-happened-but-just-deny-that-I-was-involved” type confession which was the only way to avoid being caught up in further legal trouble in post-war Germany. Finally, it is of great significance that Suchomel died in 1979—that is, six years before the film was released, and thus never saw his “confession,” and was never able to deny or refute anything which Lanzmann had attributed to him.