In 2011, much media attention was given to the conviction in Germany of Ukrainian-born John Demjanjuk on charges of having been a guard at the Sobibór concentration camp during 1943.
The Demjanjuk case serves as one of the best examples of the sort of lies and distortions which have characterized almost every single “war crimes trial” since 1945.
Below: April, 25, 1988: John Demjanjuk is found guilty in an Israeli court of being “Ivan the Terrible,” a “gas chamber operator” at the Treblinka camp. The guilty verdict was based on “eyewitnesses” who testified in court, and a SS identity card bearing his photograph. The card was later proven to be fake, and the Israeli court overturned its earlier verdict and set him free. In doing so, the court acknowledged the all the Jewish “eye-witnesses” who had identified Demjanjuk, were lying. 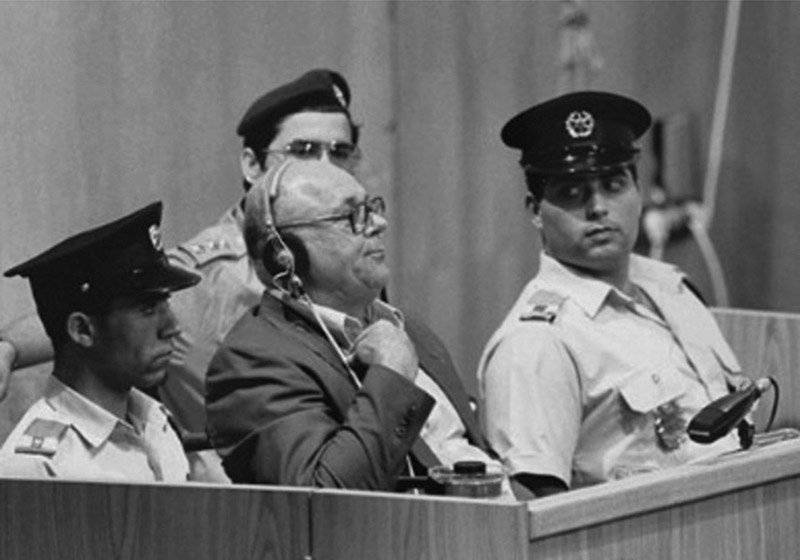 The Demjanjuk story began in October 1975, when a list of names of alleged Nazi war criminals was circulated amongst members of the US senate. The list originated with the Soviet Union’s KGB, allegedly out of material captured by the Soviet Army at the end of World War II.
One of the names appearing on the list was that of John Ivan Demjanjuk, who had immigrated to the US in 1951 and who was living in Cleveland, Ohio.
The KGB document alleged that Demjanjuk had been a soldier in the Red Army who, after falling into German captivity, had volunteered for service in the SS. Demjanjuk, had, said the Soviet document, undergone training at the SS camp in the town of Trawniki, Poland. He had, continued the document, served from March 1943 as an SS guard at the Sobibór camp, and later at the Flossenbürg concentration camp.
Acting on this information, the US government started proceedings to strip Demjanjuk of his citizenship, based on his alleged concealment of his Nazi past from the Immigration and Naturalization Service.
In addition, the US Government instructed its Department of Justice to start a full investigation into the allegations contained in the Soviet document, in preparation for a deportation hearing to send Demjanjuk to Israel for trial.
In February 1976, the American government requested the Israeli government’s cooperation in finding Israeli citizens who were survivors from the Sobibór camp who might be able to identify Demjanjuk.
The source of identification was passport photographs submitted by Demjanjuk to the INS during his application for citizenship in 1950, with the logic being that Demjanjuk would still appear relatively similar to how he had looked in 1943.
During 1976, the Israeli police identified a number of Jews who were on record as having been rescued or escaped from the Treblinka or Sobibór camps. These “survivors,” when shown the photographs of Demjanjuk, identified him as a guard called “Ivan the Terrible” who had allegedly operated the gas chamber at Treblinka.
Despite the American government actually having identified Demjanjuk as having been a guard at the geographically separate Sobibór camp, the “eyewitness survivors” placed Demjanjuk at the Treblinka camp, and of being the gas chamber operator there. The next year, 1977, the INS instituted denaturalization proceedings against Demjanjuk. After an extended legal battle, Demjanjuk was deported to Israel in 1986 to stand trial.
The State of Israel’s application for extradition was based on the testimony of these “eyewitnesses” and an SS identification card, allegedly issued to Demjanjuk upon completion of his training at the Trawniki SS camp.
This card, which became known as the “Trawniki certificate” was a pivotal piece of evidence, as it contained Demjanjuk’s photograph. The card had been provided to the prosecution directly out of Soviet records.
Along with the identification card, the prosecution produced five “eyewitnesses” who all testified that Demjanjuk was “Ivan the Terrible” who operated gas chambers in Treblinka.
Demjanjuk’s defense was that he had been captured by the Germans and had remained in their captivity throughout the war, never serving with the SS. The prosecution dismissed his defense, producing eyewitnesses identifying him personally, and an SS-identification card with his photograph.
Below: The “Trawniki Certificate,” an SS identification card bearing John Demjanjuk’s name and photograph. Supplied by the KGB, it was a critical piece of evidence in Demjanjuk’s first trial in Israel in 1987, and ensured his conviction. It was only with the collapse of the Soviet Union that the KGB file on Demjanjuk was released and it was revealed that the card was a forgery. The Israeli Supreme Court then overturned Demjanjuk’s conviction and set him free. 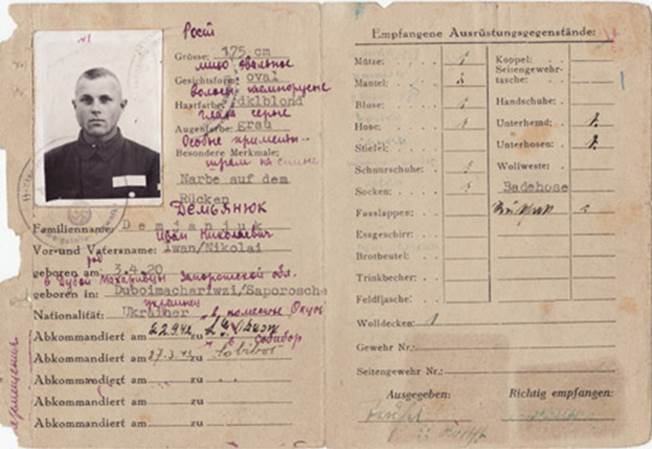 The first “survivor” to testify, Pinhas Epstein, took the stand on February 23, 1987, and told the court that
“I am convinced that opposite me sits Ivan the Terrible of Treblinka” (Gas Chamber Worker Tells of Horrors, Reuters, February 23, 1987).
The next “survivor eyewitness,” Eliyhau Rosenberg, then told the court on February 25, 1987:
“This man is Ivan, without a shadow of a doubt—Ivan from Treblinka, from the gas chambers—the man I am looking at now” (This Man is a Killer, Reuters, February 25, 1987).
Below: Many “eye-witness survivors” who testified in court that they had seen Demjanjuk in Treblinka, operating a “gas chamber.” All were lying. 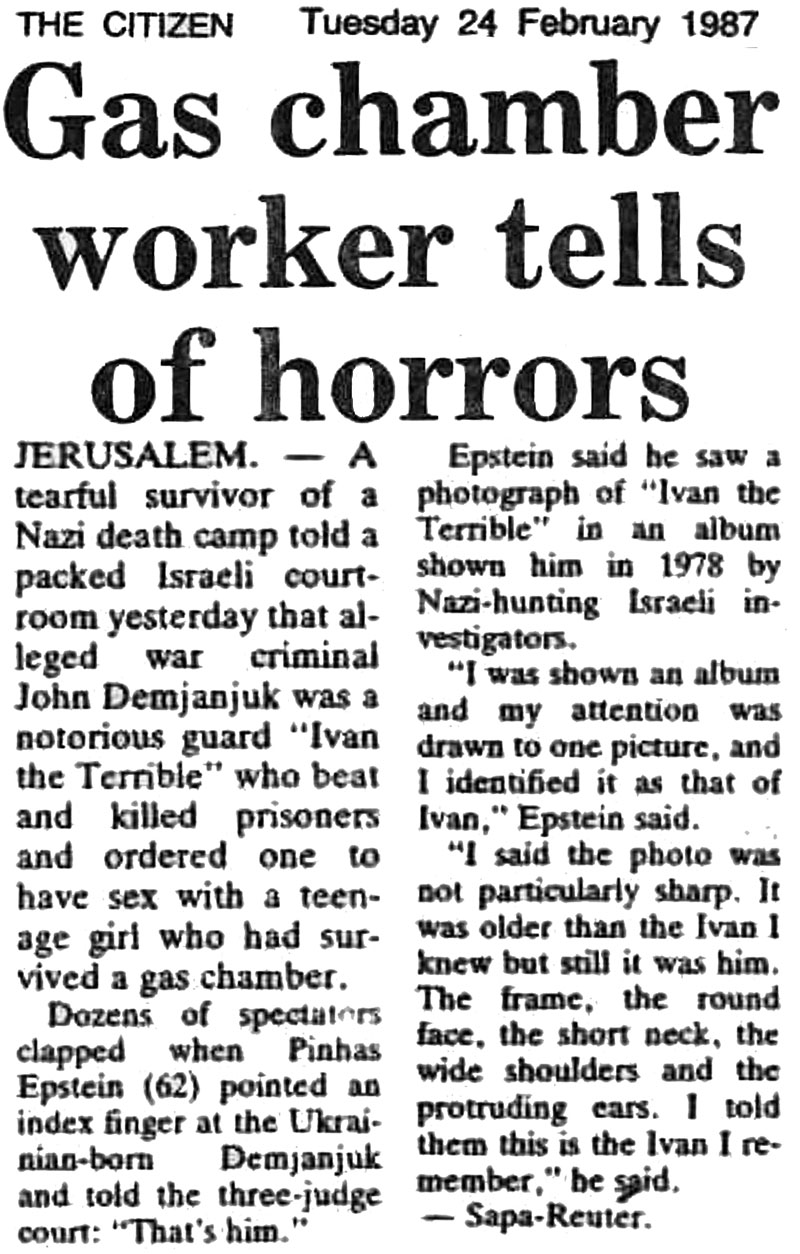 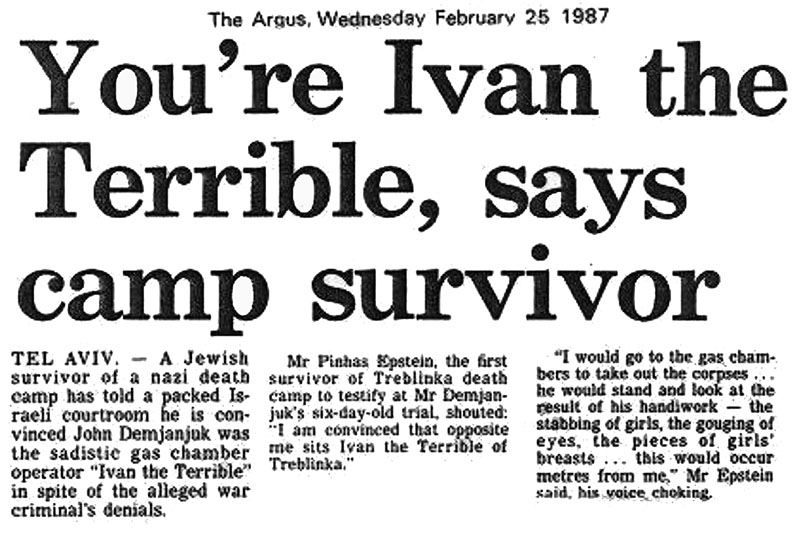 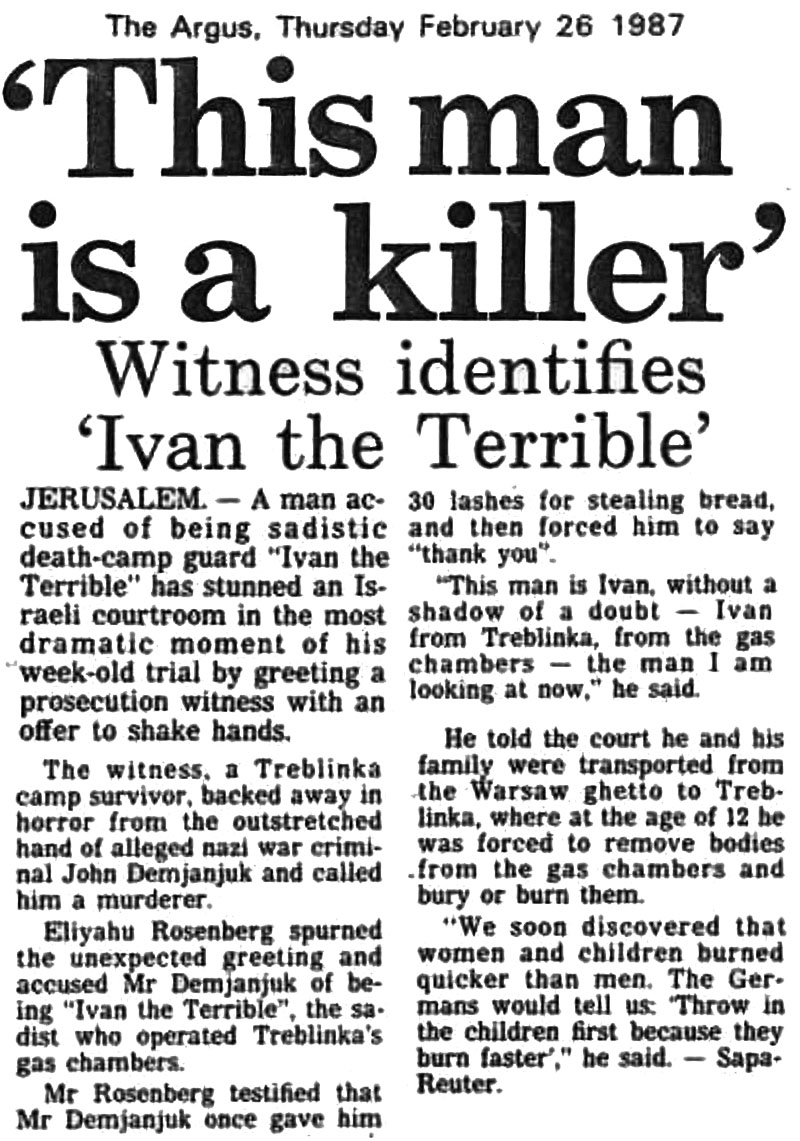 To no one’s surprise, the Israeli Court found Demjanjuk guilty on April 18, 1988, and a week later, sentenced him to death. The conviction had been obtained based primarily on the SS identification card and the eyewitness accounts which identified Demjanjuk as the gas chamber operator at Treblinka.
The defense immediately appealed, citing numerous irregularities in court procedure, rules of evidence, and other issues.
At a critical juncture in the appeal process—when Demjanjuk’s life hung in the balance—fate intervened. One of the appeal judges had a heart attack, and the case was postponed.
During the postponement, in 1990, the Soviet Union suddenly collapsed. As a result, the KGB archives on the case were opened. In the KGB file dealing with Demjanjuk, the shocking truth was revealed: the Trawniki certificate had been forged to frame the Ukrainian as part of a campaign against Ukrainian nationalists.
Faced with the exposure of the Trawniki certificate as an outrageous forgery, the Israeli Supreme Court, to its credit, acknowledged that the entire case against Demjanjuk had been fabricated from start to finish, and acquitted him in July 1993, stating that there was no evidence to show that Demjanjuk was indeed “Ivan the Terrible.”
On September 22, 1993, John Demjanjuk was finally released and allowed to return home to Cleveland, Ohio, after spending seven years in an Israeli jail because of a KGB forgery and fabricated evidence from “holocaust survivors.”
Implicit in its dismissal of the case against Demjanjuk, the Israeli Supreme Court tacitly acknowledged that all of the eyewitness accounts which placed Demjanjuk at Treblinka, were false.
For this reason, the John Demjanjuk case serves as an outstanding example of just how unreliable “holocaust survivor eyewitnesses” are.
For if the Israeli Supreme Court could not bring itself to believe them—and that institution, of all, would be the most likely to take their word —then this serves as an indication of just how false these accounts are.

Astonishingly, this was not the end of the persecution of John Demjanjuk. In 2009, he was deported to Germany to stand trial once again on charges of being a guard at Sobibór. The prosecution’s chief document was once again the Trawniki certificate.
Perversely, the German court ignored the Israeli Supreme Court’s ruling and a 1985 report from the Cleveland office of the FBI which specifically said that the Trawniki certificate was “quite likely” a KGB forgery. Demjanjuk was convicted in 2011 and sentenced to five years’ imprisonment. He died while appealing against the sentence.
The last word in the Demjanjuk trial was had by Christiaan F. Rüter, Professor of Law at the University of Amsterdam, who is the world’s acknowledged expert on National Socialist trials in Germany. He was quoted in the German media as saying that “it is a complete mystery, how anyone who knows the German jurisdiction up to now, would be able to assume that Demjanjuk could be sentenced based on the given evidence.”