Section 27: The Legally-Flawed Nuremberg “War Crimes Trials” Did Not “Prove” the Holocaust

The Holocaust storytellers like to claim that the Nuremberg War Crimes Trials “proved” the mass murder of Jews in open court.
In reality, nothing of the sort was ever proved, and the main charges did not relate at all to the alleged mass murder of Jews.
Below: The Nuremberg Trials have been dismissed by all honest legal experts as a farce. People were charged on hearsay evidence, and for “crimes” such as “waging aggressive war.” The Soviets, who had invaded Poland, Finland, and the Baltic States earlier in the war, sat on the judges’ panel and sentenced German leaders to death for invading Poland. 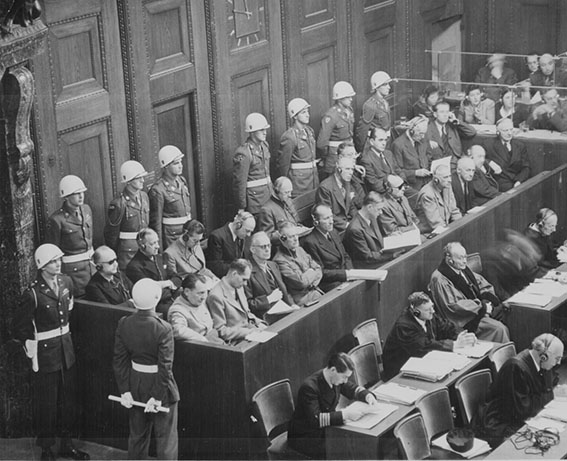 The actual indictments at the main Nuremberg Trials were as follows:
“1. Participation in a common plan or conspiracy for the accomplishment of a crime against peace.
“2. Planning, initiating and waging wars of aggression and other crimes against peace.
“3. War crimes.
“4. Crimes against humanity.”
In normal legal systems, it is an established legal principle that no one can be charged for a crime that was not a crime at the time the act was committed—in other words, that no one can be charged retrospectively for an act which was not classified as a crime at the time when it was committed.
The Nuremberg Trial indictments are clearly a major abrogation of this principle, a fact which led the famous British General Bernard Montgomery, victor of the Battle of El Alamein, to remark with reference to the Nuremberg Trials that he no longer wished to lead any armies because it had now “become a crime to lose a war.”
The legal basis of these main charges aside, the entire Nuremberg Trials process was from the very beginning a mockery because one of the judging parties—the Soviet Union—had, for the first two years of the war, been an ally of Nazi Germany!
For the German leaders to be charged with “waging aggressive war” and “planning, initiating, and waging wars of aggression and other crimes against peace”—and then to be found guilty thereof by judges who included Soviets, is one of the most extreme acts of twisted irony ever seen on the international legal stage.
If Germany could be charged for invading Poland on September 1, 1939 (the main charge of “waging aggressive war”), then why were the Soviets not charged for invading Poland on September 17, 1939—after concluding a secret deal with Nazi Germany over the matter? Why was the Soviet Union not charged with “waging aggressive war” over its invasion of neutral Finland on November 30, 1939? In addition, nothing was said of the seizure of Lithuania, Latvia, and Estonia by the Soviet Union in June 1940.
The irony of the Soviets sitting in judgment over the Germans on charges of “waging aggressive war” was but only one of the many travesties of justice at the Nuremberg Trials.
The third charge, that of “war crimes” was equally outrageous. According to the definition used at the trials, a war crime was “a serious violation of the laws and customs of war.” The mass Allied bombing of German civilians—started by Britain (with the Germans only retaliating after months of nightly bombing)—was certainly a violation of the “laws and customs of war,” as were the mass rapes of German women carried out by Soviet soldiers in 1945.
However, these same Allies saw fit to put German leaders on trial for a handful of outrageous acts committed by underlings—none of which were ever sanctioned at senior level, unlike the bombing of civilians, an idea which came from Winston Churchill himself.
The fourth charge, “Crimes against humanity” was vaguely defined by the Nuremberg Trials as acts “committed in execution of, or in connection with, the aggressive war, and therefore constituted crimes against humanity” (Judgment: The Law Relating to War Crimes and Crimes against Humanity, Judgment of the International Military Tribunal). In other words, none of the defendants at Nuremberg were specifically charged with the mass gassing of Jews or the operation of extermination camps. They were only alleged to have been “generally responsible.”
As a result it is untrue to claim that the Nuremberg Trials “proved the Holocaust.”
Even much of the “evidence” produced at those trials has long since been accepted as false. A reading of some of the incredible evidence presented as evidence borders on the laughable if it were not so illustrative of the outrageousness of the “trials.” By way of example, some of the “evidence” submitted to Nuremberg under the “crimes against humanity” charge included wild claims of “Jewish soap,” “shrunken heads,” “lampshades,” “gassing by steam”, execution by “electrocution” socks made of human hair, and even an astonishing affidavit by a “survivor” which claimed that the SS had killed Jews in one of the Polish camps with a “pedal-driven brain-bashing machine.”
All of this was accepted at face value during the court proceedings, even though they have long since been dismissed as lies by all serious historians.

A very large number of Nazi “confessions” still regularly used today to “prove” the Six Million came from prisoners held by the Soviet Union—and were obtained under torture. The best example of this came when the Soviets obtained “confessions” from, put on trial, and executed, Germans who they blamed for the murder of thousands of Polish officers and intelligentsia in the Katyn Forest during the war. The Katyn Massacre, as it is better known, had been committed by the Soviet Union’s secret police, the NKVD in May 1940.
Some 22,000 Poles were executed by being individually shot on direct order of the Soviet leadership (an order for the executions was signed by Stalin in person) and the bodies were buried in the Katyn Forest, twelve miles west of Smolensk.
The Germans discovered the graves in 1943. They appointed an international commission consisting of twelve forensic experts and their staff from countries such as Belgium, Bulgaria, Denmark, Finland, France, Italy, Croatia, the Netherlands, Romania, Sweden, Slovakia, and Hungary. In addition, a large number of Canadian, British, and Polish prisoners-of-war were allowed to attend the excavations.
The Soviets blamed the Germans and when they retook Smolensk, appointed a new commission which blamed the Germans, destroyed the Red Cross-built cemetery in the Katyn forest and removed other evidence.
Later, two of the twelve forensic experts, the Bulgarian Marko Markov and the Czech Frantisek Hajek were arrested by the Soviets and forced to recant their evidence and blame the Germans.
The accusation that the Germans were responsible for the Katyn Massacre was then entered into the Nuremberg Trial court proceedings, which even specifically named which German army units and officers were responsible for the murders. Finally, in December 1945, in one of a series of “War Crimes Trials” held in Leningrad, a German army officer named Arno Düre was formally charged with participation in the Katyn Massacre.
Düre made a full “confession,” explaining in detail how he had seen the Germans shoot and bury thousands of Polish officers. In a tactic which duplicated the defense used by other German war crimes accused, Düre managed to avoid implicating himself directly as a murderer, and was therefore “only” sentenced to twenty years hard labor.
Below: A report in the New York Times of December 31, 1945, in which the conviction and execution of Germans for the Katyn Massacre was announced. Even though the Soviets had carried out the massacre, Germans “confessed” to the crime, and even testified in court about their guilt—setting the example for many of the “war crimes” trials which followed. 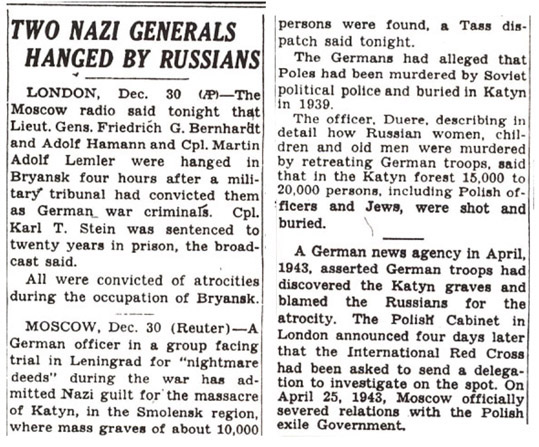 Below: Excavation of the bodies at Katyn, 1943. 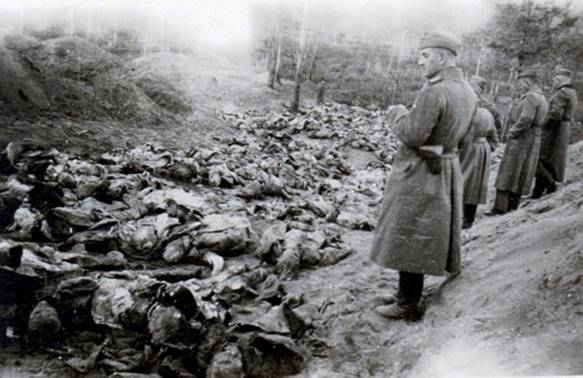 Below: A German propaganda poster distributed in Poland illustrating the method of execution. The Soviets blamed the Germans for the massacre, and, filled with a desire to avenge the exposure of the Katyn crime, went on to invent the first wave of “Nazi war crimes” in the areas of eastern Europe. 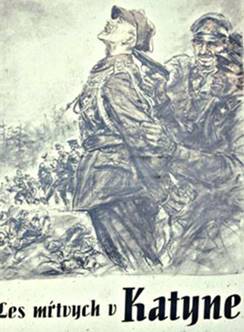 It was only in 1990, with the collapse of the Soviet Union, that the Russian government formally admitted that the Soviets were responsible for the massacre. It was too late for Düre and many other Germans who had already “confessed” to atrocities in the east.
The German “confessions” about Katyn reveal the methodology followed by the Soviets in extracting many of the “confessions” upon which the Holocaust storytellers still rely. Under these conditions, it is little wonder that the so-called “Nazi extermination camps” all just happened to be located in the Soviet-controlled parts of Europe, rather than western Europe, which were open to inspection by dissenting inquirers.

The final word on the Soviet war crimes trials comes from a study on the topic by Alexander Victor Prusin, published in the Holocaust and Genocide Studies in 2003:
“In Minsk a member of an execution detail, SS-Unterscharführer Franz Karl Hess admitted that he personally had killed more than one hundred people. His co-defendant Generalleutnant Johann Richert stated, ‘horrible and mind-shattering facts were demonstrated in the court.... Now I am a determined opponent of the Nazi regime, and ready to do my share in the antifascist struggle.’
“Hermann Koch confessed to having personally murdered up to five hundred people and emphasized his own initiative in carrying out criminal orders: ‘I was a fascist and remain a fascist. I did not simply carry out orders, but I was firmly convinced in the rightness of what I was doing. Racial theory made me a criminal. Much blood is on my hands; I ask for the death penalty for I do not know whether I could ever be able to remedy my crimes.’
“Such self-abasing confessions cast grave doubt on Soviet methods of obtaining evidence, and support the thesis that the proceedings were merely show trials. The conduct of the trials, then, begs a crucial question: do the trials have any value as legal and historical evidence?
“One should look at the interrogation records, which indicate that the defendants were under constant physical and psychological pressure. Sleep deprivation was but one tool used by the interrogators to extract information.
“As a rule, interrogation lasted for hours and often took place at night. Such methods especially affected the health and psyche of the other generals and senior officers, who were on average in their late fifties. Thus, on December 15, 1945, an interrogation of General Richert lasted from nine o’clock at night until two in the morning.
“On December 27, 1945, Jeckeln was subjected to questioning from eleven o’clock in the morning until five in the afternoon, while on January 8, 1946, he was interrogated from ten at night until half past six in the morning. Apparently some defendants were selected for trial because they agreed to cooperate—possibly upon promises of leniency (often unfulfilled), or simply because they were resigned to their fate. For example, there are indications that General Erdsmanndorf was a member of the Soviet-sponsored “Committee for a Free Germany,” which carried out anti-Nazi propaganda among German POWs” (Alexander Victor Prusin, “‘Fascist Criminals to the Gallows!’: The Holocaust and Soviet War Crimes Trials, December 1945-February 1946,” Holocaust and Genocide Studies 17.1, (2003) 1-30, Oxford University Press).