The Bergen-Belsen camp in northwestern Germany was originally a prisoner of war camp named Stalag XI-C.
It was “converted” into a concentration camp in 1943 on the orders of SS Reichsführer Heinrich Himmler as a part of a program to exchange Jews for German POWs held by the Allies (Ben Shephard, After Daybreak—The Liberation of Belsen, 1945, London, Random House, 2006).
The camp was liberated by the British army on April 15, 1945. Mainly because a large Western media contingent accompanied the British soldiers, and thereby had immediate access to the entire camp, it has never been claimed that there was a “gas chamber” at Bergen-Belsen.
Nonetheless, the pictures of piles of emaciated bodies and mass graves taken at Bergen-Belsen have come to symbolize the entire Holocaust, and more often than not the horrific images are presented as “victims of the Nazi genocide” and, by implication, the “gas chambers.” As shocking as the images are, they are not evidence of any mass extermination policy.
The reason for the large number of deaths was simply that a typhus epidemic had erupted in the camp during the closing months of the war, and the Allied bombing of the German infrastructure had made it impossible to bring up sufficient supplies—including Zyklon-B, which was used to delouse clothing and kill the typhus-carrying lice—to combat the disease and to keep the prisoners properly fed.
As the British army approached Bergen-Belsen, the Germans negotiated a truce and exclusion zone around the camp to prevent the spread of epidemic typhus.
The British were forced to implement a strict regime at the camp to stop the disease spreading, and measures taken even included the stationing of armed guards under typhus warning signs at the gates.
Below: A British solder stands guard outside the Belsen camp after liberation. The warning sign is for visiting Allied soldiers not to drive too fast for fear of spreading typhus in the dust. 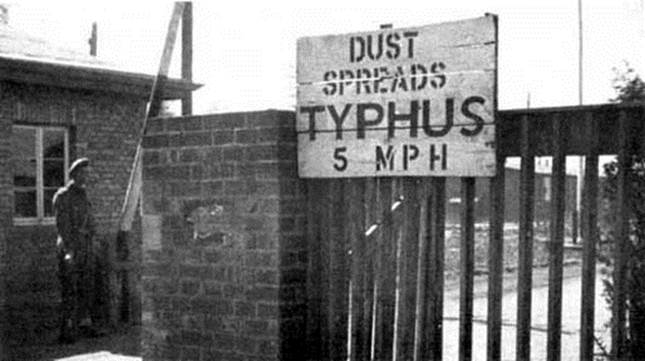 According to camp records, some 35,000 inmates died of the disease from January to April 1945, and when the British entered the camp, some 13,000 bodies still lay unburied. It is these corpses which were photographed being buried and bulldozed into mass graves, which have now become etched in the public mind as the “Holocaust.” Some 55,000 other inmates were however saved and removed after being deloused.
Below: Allied soldiers supervise a mass burial at Bergen-Belsen. Horror scenes like these awaited the camp’s liberators, and these images have come to exemplify the Holocaust. As terrible and as tragic as they were, the truth is that these unfortunate people died of the typhus epidemic which swept through many of the camps during the last months of the war, and not from any mass murder or genocide program. Zyklon-B, which had been used as a delousing agent, had been in short supply due to the Allied aerial bombardment of Germany’s infrastructure. It is thus doubly ironic that the German inability to supply Zyklon-B delousing chemicals to Bergen-Belsen contributed to the typhus epidemic which caused these nightmarish scenes. 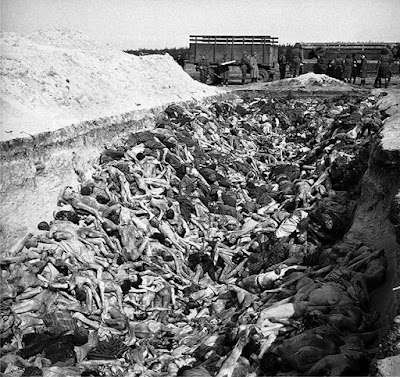 The typhus epidemic was so bad that once the prisoners had been washed and deloused (by German doctors under Allied supervision), the entire camp was then burned to the ground by flamethrowers mounted on British army Bren carriers to kill the last of the lice.
Below: The lice-born typhus epidemic at Bergen-Belsen proved too much for even the British occupiers, and eventually the entire camp was ordered destroyed to end the disease. A British flame thrower is employed to set fire to the buildings, and below that, British army personnel watch the camp burn. 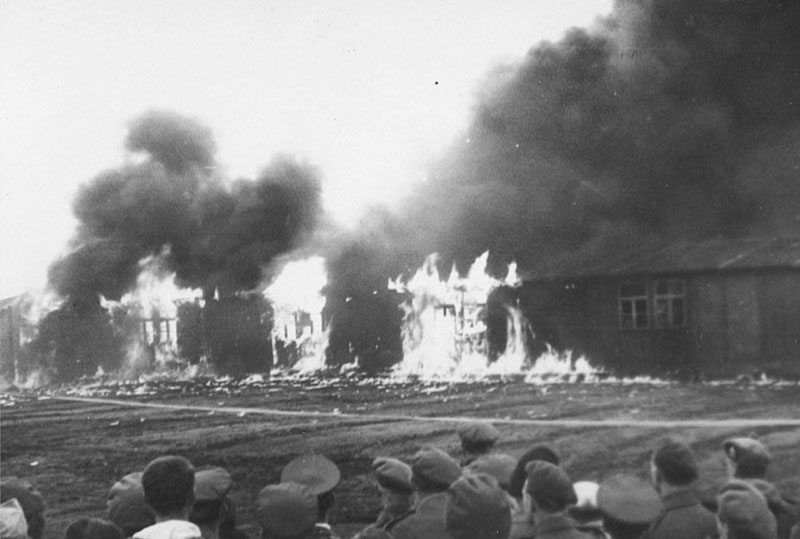 Bergen-Belsen is thus a supreme and awful irony.

The lice infestation grew out of control because the Germans were unable to ship enough Zyklon-B to the camp because of Allied bombing.

The large number of deaths at Bergen-Belsen are therefore attributable to the lack of Zyklon-B at the camp—something which turns the entire “extermination” legend on its head.
It is also ironic that the awful scenes of death found at Bergen-Belsen were not the result of any “gas chambers” but are nonetheless used by the Holocaust storytellers to “prove” that genocide took place.