The Sachsenhausen concentration camp outside Berlin hardly features in the “extermination” legend in present-day Holocaust storytelling, but in the period immediately following the war, it was big news. Located in the Soviet occupation zone of Germany, it was at first taken over by the Soviet secret police, the NKVD, for the detention and interrogation of German prisoners.
Then, during the 1947 Soviet Military Tribunal held in Pankow, Berlin, the commandant of Sachsenhausen, Anton Kaindl, was put on trial. Kaindl “confessed” to having ordered a gas chamber to be built at the camp in 1943 which used “liquid Zyklon-B.”
Immediately after making this “confession,” Kaindl was moved to the Vorkuta Gulag in Siberia, where he conveniently died of unknown causes within a few months.
The first indication that there was something untoward with the Sachsenhausen “gas chamber” came in 1952, when the Soviets announced that they had bulldozed the building which contained the chamber.
No one could understand why this supposedly clear-cut “evidence” of Nazi crimes would be destroyed in this manner.
In 1992, however, the truth finally emerged when a long-hidden statement by a German prisoner-of-war, Gerhart Schirmer, was made public.
In his statement, Schirmer revealed that after his capture by the Soviets, he and a number of Germans were taken by the NKVD to Sachsenhausen in October 1945.
There, his statement said, he and seven other prisoners were ordered by the Soviet political officer, Lieutenant-Colonel Kolowantienkow, to rebuild a shower in a building in the “Front Zone” of the camp into a mock gas chamber and execution room.
“When we arrived, the material required for the construction work was already there. Under the directions of Klein, we now connected pipes from outside the building to the water supply pipes. We built an additional concrete cell adjoining the bathroom measuring about 4×2 square meters with an opening into the ante-room of the shower room. The new opening from the ante-room to the newly built so-called ‘execution room’ [Erschiessungsraum] was about 20 cm wide. It was made to look as if the offender who was to be shot would have stood at the entrance facing the concrete wall enabling the person with the gun to fire a shot into the back of his head.
“As we were unable to prevent the construction of the installation, it seemed to make sense to us that we should continue the work and, in this way, learn what was being made there. After completion, at about the end of October 1945, Dipl.-Ing. Dörbeck was brought before the political officer alone and received precise instructions about the explanations he was to give to Soviet groups of visitors. He had to say the following:
‘This installation, which was built by the Nazis, served to kill [Vernichtung] Jews and Soviet officer prisoners. Each day some 200 people were gassed and about twenty-five were shot. This went on from 1943 till 1945 (April).’
“From about December 1945 until the end of 1947 an average of two tours a week, each consisting of some thirty to forty Soviet men, mostly soldiers and people from the GPU, and women, were escorted by Dörbeck round the installation.
“There were often officers amongst them who quite openly expressed doubts about the age of the installation because they saw that the concrete was new, that there were no bullet holes from the executions in the concrete wall and that the blood stains (red paint) were very meager and unconvincing.”—Signed Gerhart Schirmer, Rastatt, 16.12.86 (Gerhart Schirmer, Sachsenhausen—Workuta. Zehn Jahre in den Fängen der Sowjets, Grabert, Tübingen, 1992).
Below: These foundations are shown to present-day visitors to the Sachsenhausen camp outside Berlin as the remains of a “gas chamber.” The “gas chamber” was demolished in 1952 after its obviously falsified nature had become an embarrassment. A German prisoner of war revealed in the 1980s that he and seven other colleagues had been forced to build the structure in November 1945 to provide “evidence” for the Soviet’s allegations of mass gassing at camps in Germany. Even though no “Holocaust historian” today claims that there were any gassings in Germany (they say they only took place in Poland), visitors to Sachsenhausen are still told that this was a “gas chamber” in which thousands were killed. 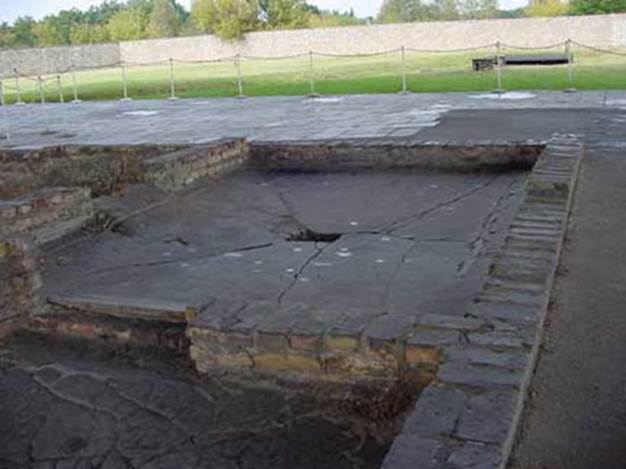 The preposterous “gas chamber” and “execution room” were so blatantly fake that they were torn down only a few years after being constructed, thereby destroying all incriminating evidence. Nonetheless, visitors to Sachsenhausen are still today shown the foundations of the building and told that a “gas chamber” killed thousands there. The Holocaust storytellers are able to continue with the deception about the Sachsenhausen and Dachau “gas chambers” hoaxes in Germany because it is a criminal offence to even say that they were not real.
The German POW Schirmer was prosecuted in Germany just for allowing his sworn statement to become public. He was given the choice of a fine or imprisonment at the age of 90, and chose the fine because he said, he had already served eleven years in a Soviet prison and did not want to die in a German one. This serves as a tragic reminder of how the Six Million lie is maintained.
Next Chapter