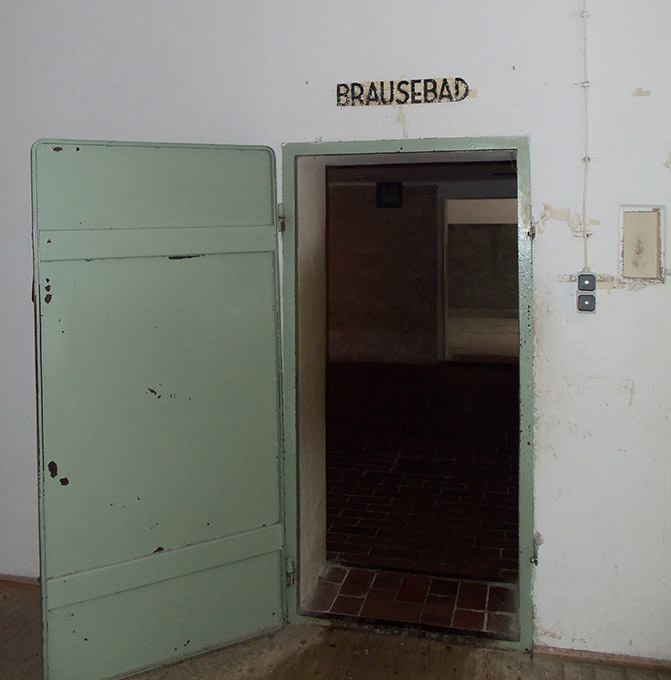 The claim that gas was “let in through perforated brass fixtures” in the ceiling as per the Nuremberg trial document L-159 is of particular interest, because today it is claimed that the “gas” was introduced through slide-open hatches in the wall.
The fact that the room now claimed to have been the Dachau “gas chamber” could never have been designed as, or used for that purpose, is however obvious from the most cursory inspection.
Firstly, the room is not airtight and boasts a loose window. The floor contains no less than four drains which run uninhibited into the entire building’s drain system, which includes outlets in every single room. This includes the room which houses the ovens and the alleged “changing room.”
This arrangement would of course, have been fatal for anyone working in the building, SS guards and prisoners alike. Poison gas would have immediately seeped throughout the entire structure and caused an explosion in the crematorium area, which would have destroyed the building.
Below: Contradictory signs at the Dachau camp, as presented to tourists in 2010. On the left: This sign is outside the crematorium building, and states that the “gas chamber was however never used for mass killing.” Right, the sign inside the building at the door next to what is claimed to be the “gas chamber.” It is phrased in such a way as to create the impression that the room was indeed used to gas people. 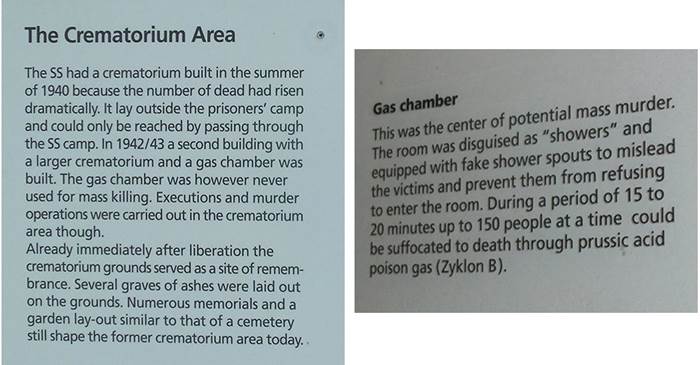 Below: The interior of the Dachau “gas chamber” as presented to tourists in 2010. The floor contains four drains, directly connected to the other rooms in the building (two of which are visible in this picture). This feature alone would have made “gassings” in the room impossible, as poisonous gas would have leaked throughout the structure and killed everyone else, SS guards included. It is now claimed that Zyklon-B was inserted through the hole in the far wall, but in 1945, the Nuremberg Trial was told that gas was emitted through “brass fixtures in the ceiling.” Today there are only crude “fake shower-heads” in the ceiling (visible in this picture), which are another postwar addition. 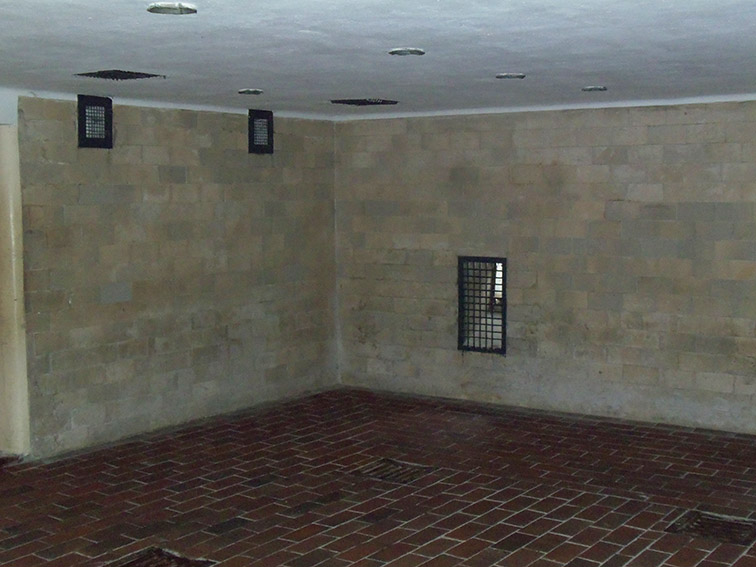 Below: A close-up of the drain in the floor of the “gas chamber” at Dachau. This open drain system runs throughout the entire building, and if the chamber had ever actually been used as a “gas chamber” the gas would have spread into every room. 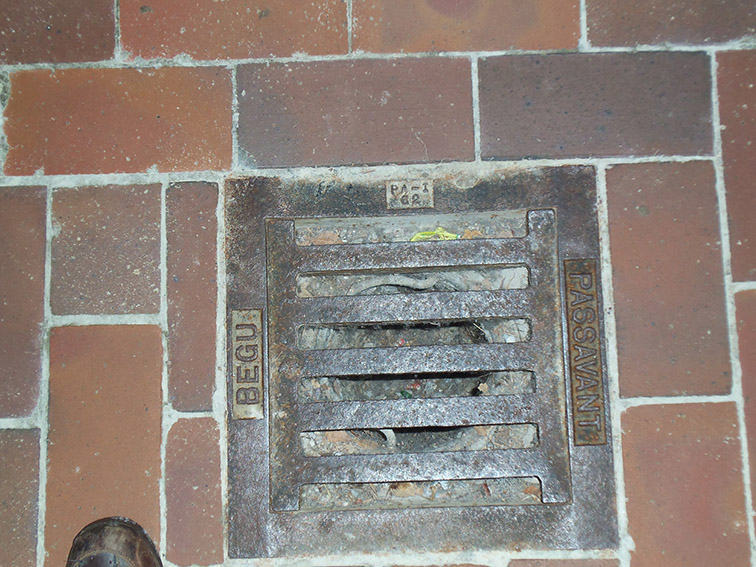 The Dachau “gas chamber” is an obvious fake, and was clearly designed for use as a morgue and washing room to hold bodies for the crematorium next door.
In a weak attempt to bolster the “gas chamber” story, very crude fake “shower-heads” have been inserted into the ceiling of the alleged “gas chamber” shown to present-day visitors. These “shower-heads,” which did not exist when the camp was liberated, are also postwar additions.
Finally, the “gas chamber” sports a ventilation shaft in the roof, something which makes the gassing claims even more ludicrous.
Indeed, some more objective observers have already remarked on this very fact. Stephen F. Pinter, who served as a lawyer for the United States War Department in the occupation forces in Germany and Austria for six years after the war, made the following statement in the widely read Catholic magazine Our Sunday Visitor, June 14th, 1959:
“I was in Dachau for 17 months after the war, as a US War Department Attorney, and can state that there was no gas chamber at Dachau. What was shown to visitors and sightseers there and erroneously described as a gas chamber was a crematory. Nor was there a gas chamber in any of the other concentration camps in Germany. We were told that there was a gas chamber at Auschwitz, but since that was in the Russian zone of occupation, we were not permitted to investigate since the Russians would not allow it. From what I was able to determine during six postwar years in Germany and Austria, there were a number of Jews killed, but the figure of a million was certainly never reached. I interviewed thousands of Jews, former inmates of concentration camps in Germany and Austria, and consider myself as well qualified as any man on this subject.”
This tells a very different story from the customary propaganda. Pinter, of course, is very astute on the question of the crematorium being represented as a gas chamber.
This is a frequent ploy, because no such thing as a gas chamber has ever been shown to exist in these camps, hence the deliberately misleading term “gas oven”—aimed at confusing a “gas chamber” with a “crematorium.”
A “gas oven” is a crematorium which uses gas as a fuel to burn a body—something very different to a “gas chamber.” Nonetheless, the term “gas oven” is frequently used to mean “gas chamber” in Holocaust literature.
The Dachau crematorium was used for the hygienic disposal of corpses of people who had died from natural causes or from individual judicial executions inside the camp. Sometimes it was even used to cremate bodies from outside Dachau as well.
For example, after the Allied air raids on Munich in September 1944—in which 30,000 people were killed—the city’s archbishop, Cardinal Faulhaber, asked the Dachau camp authorities to help in the cremation of the bombing victims. He was told that this was impossible: the crematorium, having only one furnace, was not able to cope with the bodies of the air raid victims.
Clearly, therefore, it could not have coped with the 238,000 Jewish bodies which were allegedly cremated there. In order to do so, the crematorium would have to be kept going for 326 years without stopping and 530 tons of ashes would have been recovered.

The building in Dachau which contains the crematorium and the alleged “gas chamber” does in fact contain a number of real gas chambers.
They are however, now clearly marked as “fumigation cubicles.” These are some of the best preserved disinfestation rooms which did indeed use Zyklon-B (the insertion mechanisms are still there) and from which the “Zyklon-B gas chamber” story emerged.
As in all the other camps, the only real “gas chambers” in Dachau were for disinfecting clothing, and were even used for this purpose by the occupying American army as well. The real “gas chambers” at Dachau were the disinfestation chambers located on the western end of the crematorium building.
These small chambers were used to kill lice and prevent the spread of disease, and are the best-preserved such chambers in any of the camps.
Below: This famous photograph of an American soldier outside a “gas chamber” in Dachau which has reached wide circulation. The “gas chamber” is, of course, actually one of the disinfestations chambers, but Holocaust storytellers always omit to say this when the photograph is used. 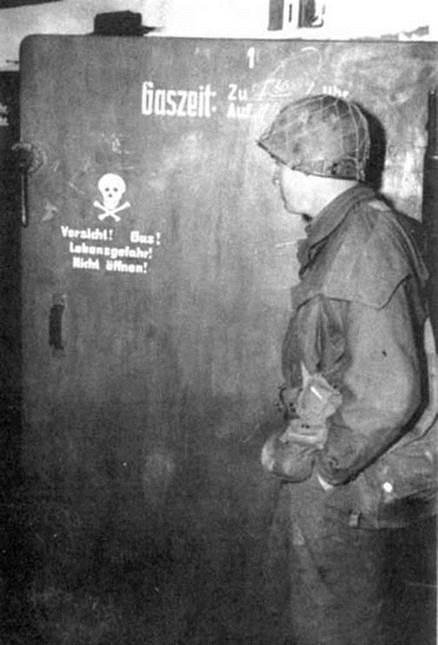 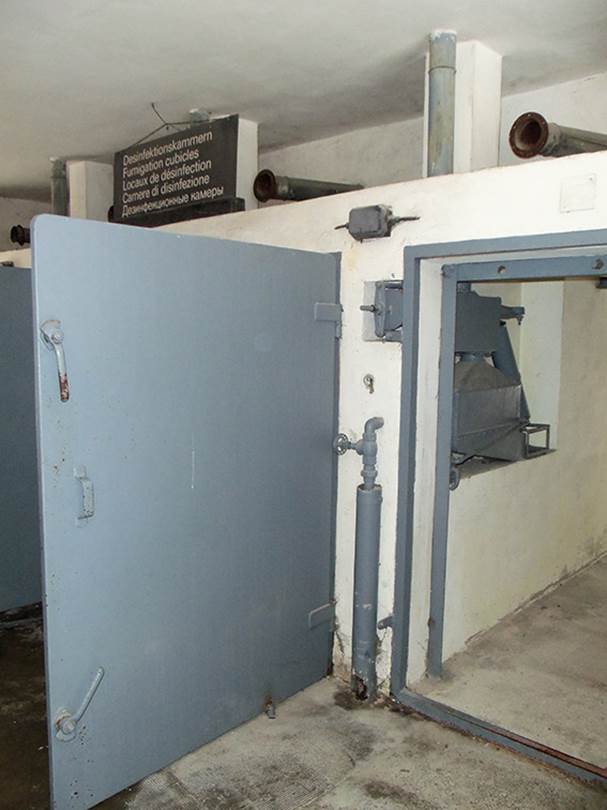 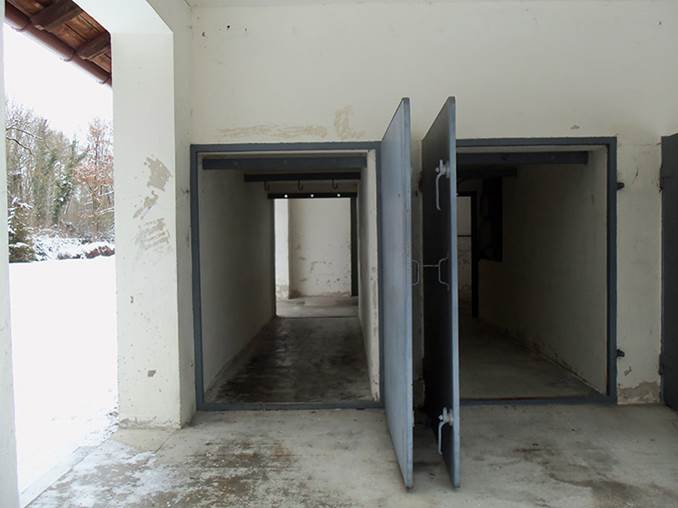 Below: The genuine Zyklon-B insertion mechanism inside one of the Dachau delousing chambers. The pellets would be dropped through from a special compartment in the ceiling and automatically released into the basket at the end of the visible tube. Compare this with the “hole in the wall Zyklon-B insertion point” of the alleged homicidal “gas chamber” (see photograph above) in the same building, and it is obvious that the latter is a fake. 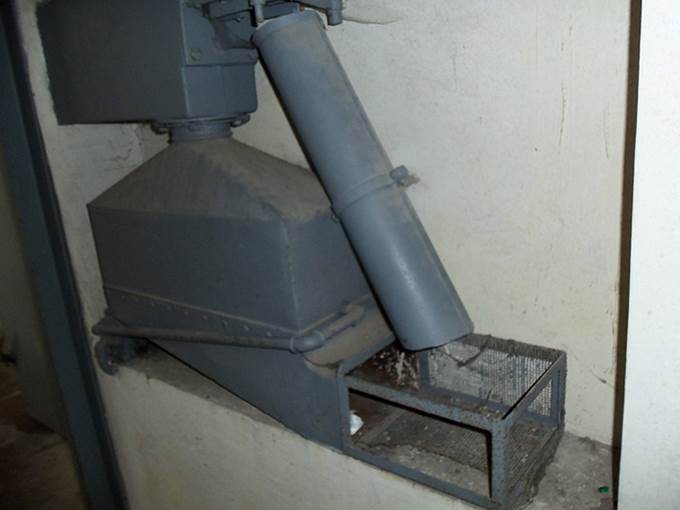 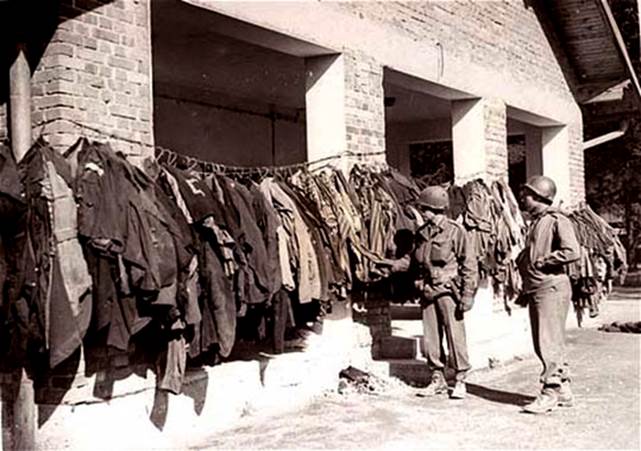 The figures of Dachau casualties are typical of the kind of exaggerations that have since had to be drastically revised.
In 1946, a memorial plaque was unveiled at Dachau by Philip Auerbach, the Jewish State-Secretary in the Bavarian Government (who was later convicted for embezzling money which he claimed as compensation for non-existent Jews) which read: “This area is being retained as a shrine to the 238,000 individuals who were cremated here.”
Since then, the official casualty figures have had to be steadily revised downward, and now stand at “only” 20,600, the majority dying from typhus and starvation only at the end of the war.
This deflation, to 10 percent of the original figure, will doubtless continue and one day will be applied to the entire figure of “six million” as a whole.
Below: Female prisoners at Dachau wave at their American liberators. 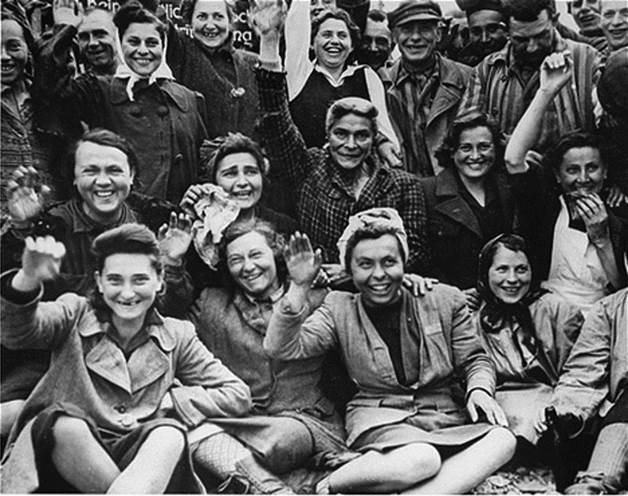 Below: Polish inmates of Dachau celebrate with champagne and cigars upon the arrival of the American troops. The prisoners all look well-fed and healthy. Hence, pictures such as these are rarely used by the Holocaust storytellers, who instead prefer to use pictures of typhus-ridden inmates to represent the concentration camp population. 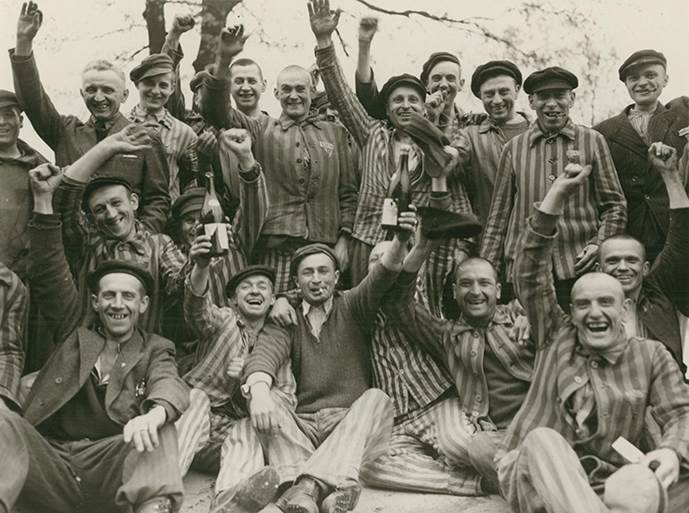