The Stutthof camp near the German city of Danzig (today Gdansk in Poland) is yet another example of how a delousing chamber has been presented as a “homicidal gas chamber”—despite even a causal visitor to the site today being able to see this fact for themselves.

Below: The Stutthof "gas chamber" as presented to tourists today. 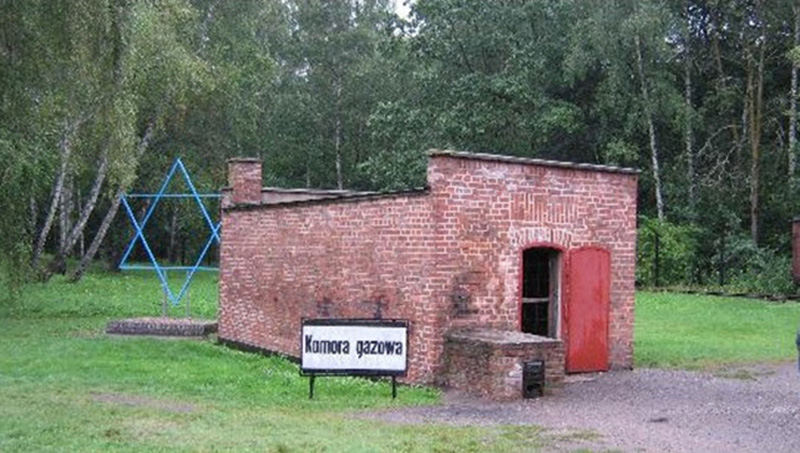 Firstly, it is significant to note that the camp was, like all the other claimed “homicidal camps,” located deep inside the Soviet-occupied part of Europe.

Given the extensive history of Soviet fakery—as outlined earlier in this book—it comes as no surprise to find that all the “evidence” for the existence of a “gas chamber” at this camp comes from Soviet, or Polish Communist, sources.

Stutthof was also the camp where the Nazis were supposed to have manufactured the “human soap from Jews” story which, along with stories of the “gas chamber” at that camp, became so popular—until the soap story was finally refuted by the official holocaust historians themselves.

This "soap from Jews" myth is openly acknowledged as such by all Jewish sources as well, for example, the Jewish Virtual Library (run by the American-Israeli Cooperative Enterprise), has been forced to engage in "damage control" on the matter to try and limit what it calls giving " the Holocaust deniers any opportunity." 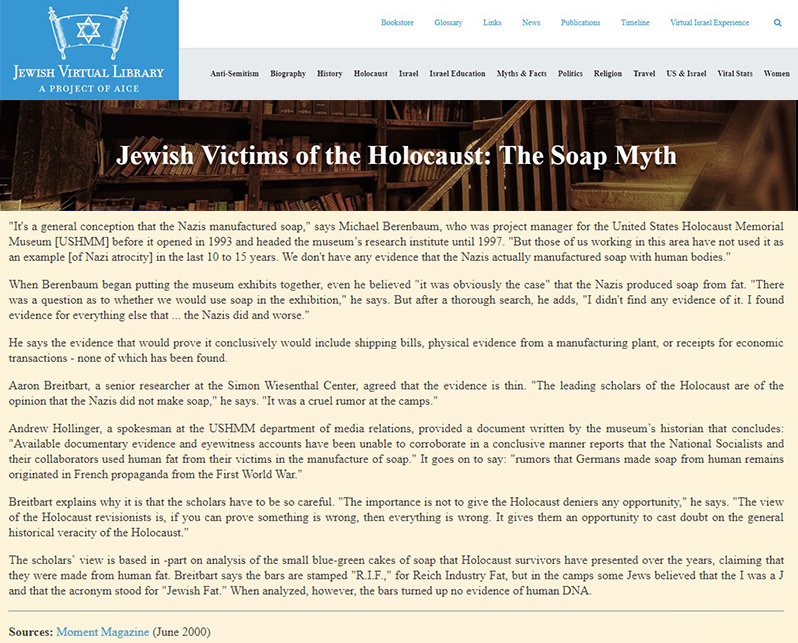 The Jewish Virtual Library's admission that the "soap from Jews story, which is centered on the Danzig / Stutthof camp, is false. "We don't have any evidence that the Nazis actually manufactured soap with human bodies. . . it was a cruel rumor..."

One German from Danzig, Dr. Rudolf Spanner, was even prosecuted after the war for making this "Jewish fat soap." Fortunately for him, the charge was quietly dropped, after much publicity so that the story became firmly embedded in the public mind.

After the soap story was abandoned, the same “witnesses” who spoke of the “gas chamber” at Stutthof were also quietly dropped, and for many years Stutthof was ignored as an “extermination center” completely.

It is only relatively recently that the camp—and its alleged “gas chamber” has been resuscitated into an “extermination center”—with the “witness” evidence for the use of the delousing chamber as a “gas chamber” now being stripped of the “soap” testimony.

The official holocaust storyteller narrative of the “gas chamber” at Stutthof was summarized by Jean Claude Pressac in his book, Auschwitz, Technique and Operation of the Gas Chambers, (Beate Klarsfeld Foundation, New York 1989, p., 539f).

In that book, it is significant to note that the official narrative fully admits that the small building was in fact created as a delousing chamber, and then only later “used” as a homicidal gas chamber:

“Its dimensions (8 meters long, 3 wide and 2.30 high, giving a volume of approximately 55 m3) . . . There are two gas-tight doors, one at the southern end and the other at the northern end . . . . The agent used for delousing is not known precisely, but given the presence of the external stove, it must have been either dry heat or hydrocyanic acid used in a heated room.

“From June 22nd to the beginning of November 1944, it was used as a homicidal gas chamber for groups of about 100 people, Zyklon B being poured in through a small opening of 15 cm in the roof, a system apparently introduced on the advice of SS Lieutenant Colonel Rudolf Höß, former commandant of Auschwitz-Birkenau and at that time head of Department D1 of the WVHA of the SS [Economic Administration Main Office].”
To fit 100 people into the tiny room would require six or seven persons being squeezed into every square meter—a physical impossibility.

One of the most quoted “witnesses” is Polish Communist Krzysztof Dunin-Wasowicz, who also claimed to have been imprisoned in Stutthof. However, a reading of his account makes it very clear that he never himself saw a gassing, but that he was “told about it” by a Kapo, or one of the Jewish policemen appointed by the camp administration.

In any event, Dunin-Wasowicz went on to become a leading historian in Communist era Poland after the war, and wrote extensively about the “gas chamber” as follows: “Originally the gas chamber was built as a room for delousing clothing, and it continued to be used for this purpose, too, for as long as it existed.” (E. Kogen, et al., Nazi Mass Murder, 1994, p. 191).

A West German court that heard "eyewitness testimony" about homicidal gassings at Stutthof declared in its 1964 verdict that "with regard to the gassings a positive determination was likewise not possible." Evidence given by several supposed witnesses of gassings was found to be dubious or not credible.( Justiz und NS-Verbrechen, Amsterdam, vol. 20, p. 615).

David Cole, a Jewish holocaust revisionist most famous for being the first to get the camp administration in Auschwitz to admit that the “gas chamber” on display at that camp was built after the war, has written extensively on the Stutthof “gas chamber,” and is worth quoting in full on the topic: 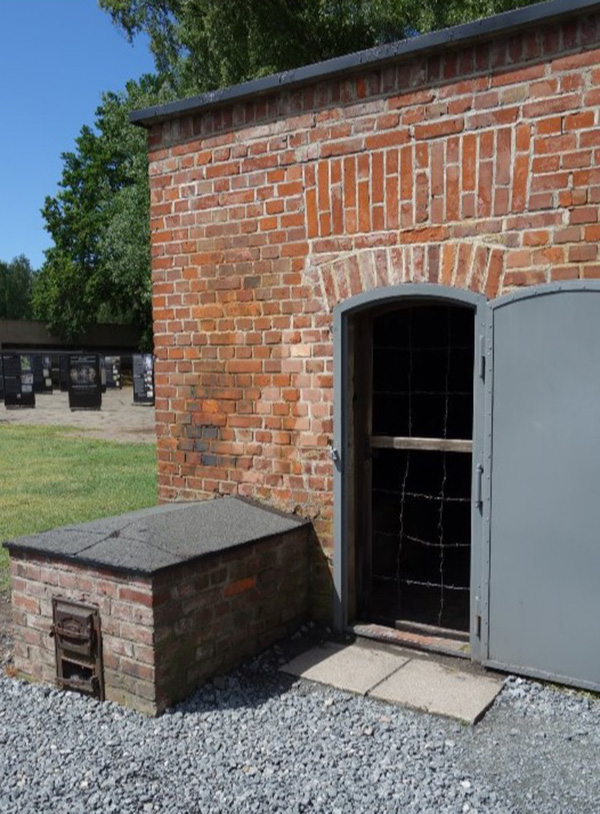 The front of the Stutthof delousing chamber, as can be seen today. Note the heating oven next to the door. This provided heat to a shelf on the inside of the delousing chamber to activate the Zyklon-B pellets which were laid down on the shelf.

The interior of the delousing chamber shows to this day the evidence of its use as that: its walls are marked inside and out with the blue staining that comes from repeated Zyklon B usage.

The delousing chamber as a stove outside the front door—to heat the chamber before the clothes were put in with the Zyklon-B pellets—and inside the chamber there is a clay heating conduit which runs the length of one wall.

The Zyklon pellets would be placed on the heating conduit, and the stove would be fired up. The conduit would become hot, and the granules would release their gas. The two doors would then be opened for natural ventilation. 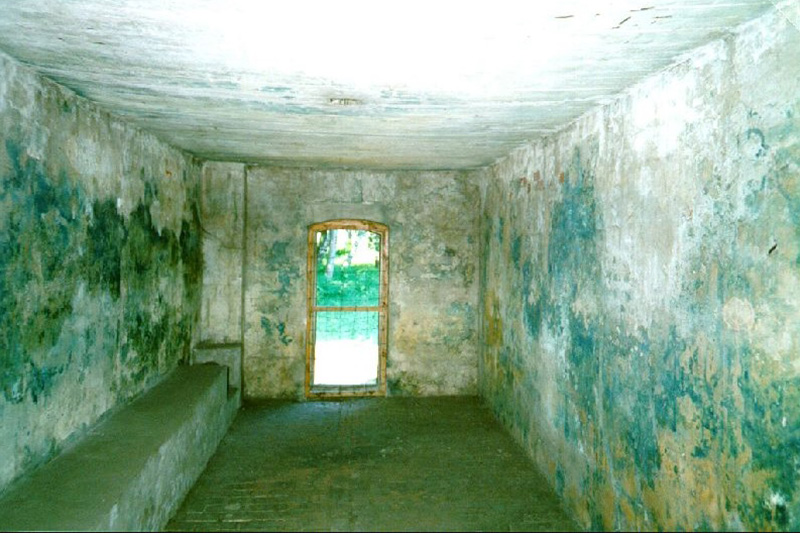 The interior of the Stutthoff delousing chamber, as can be seen today. The heated shelf upon which the Zyklon-B crystals would have been spread is clearly visible.

This is an “old style” Zyklon B delousing chamber, built before the more modern chambers, like the ones at Dachau, were designed (the newer, more energy efficient chambers came equipped with Zyklon evaporators, which would heat the granules on a kind of hot plate, and blow the gas onto the clothes, mattresses.

This was more energy efficient because it was a waste of fuel to heat an entire when it was only the Zyklon granules that needed to be warmed up. These Zyklon evaporators remain at Dachau today, in the delousing chambers of "Barrack X.").

The "evidence" of homicidal usage of the Stutthof gas chamber is a "Zyklon B induction hole" in the roof. We are told that the Zyklon would be poured in through this hole on the heads of the unsuspecting victims. The roof of this chamber is accessible only via ladder.

The Stutthof Museum personnel agree with Pressac's claim that this was first and foremost a delousing chamber, used as such for years, only later "converted" into a homicidal one.

What would stop the Zyklon granules from going down the drain, since they were being poured into the room directly over this drain? And, if a few granules missed the drain, wouldn't they simply roll, or couldn't the inmates brush them, down the drain?

2) The roof of this room is low enough so that a tall person could reach up and block the "Zyklon B induction hole." However, the thoughtful Nazis, by installing the heating conduit that runs the length of on wall, have made it possible for anyone, of whatever height, to stand on this conduit and block the hole.

What would stop the inmates from blocking the "Zyklon B induction hole," especially since they would be expecting foul play (this room was the official Stutthof delousing chamber, known as such by all the inmates. No Stutthof inmate would expect to be given a "shower" in this room, and indeed the Stutthof Museum makes no claims about such a deception (neither do the eyewitnesses)?

3) Why was this building—a clear “proof” of Nazi crimes, what with its “Zyklon B induction hole,”— not destroyed as the Nazis evacuated the camp? Amazingly, the crematorium right next door was blown up, and, in fact, one side of the gas chamber building was actually hit by shrapnel from the exploding crematorium.

Why would the Nazis blow up the crematorium, yet leave the "homicidal" gas chamber standing?