Appendix 2: The Oskar Groening “I Saw the Gas Chambers” Story

The trial of Oskar Groening, the former SS so-called “Auschwitz bookkeeper” from April to July 2015 attracted much attention and allowed the mass media—and the BBC in particular—to recycle yet another old hoary lie on the topic: namely that Groening had said in a documentary that he had “seen the gas chambers.” 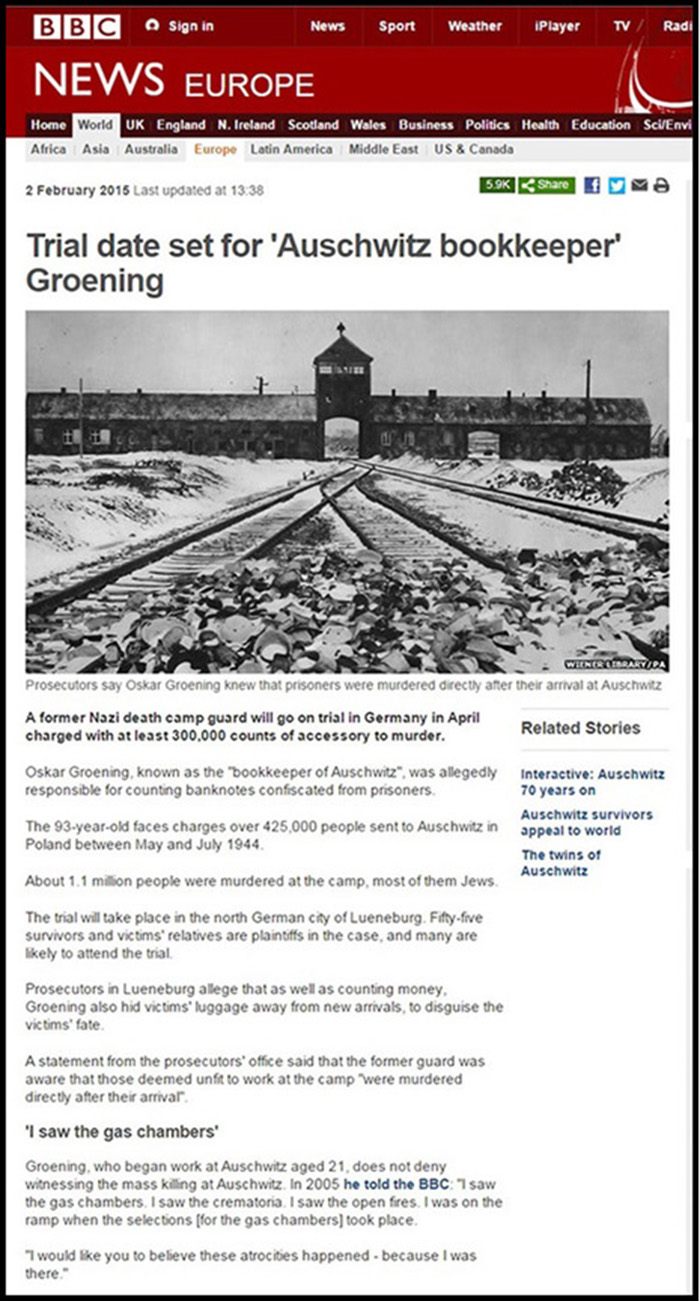 The Trial Dissolves into a Farce

The trial soon dissolved into a farce after Groening accused “eyewitnesses” of exaggerating, and an analysis of his own account of a “gassing at Auschwitz” showed that his claims were fabricated, completely inconsistent with all established “evidence” and included a patently bogus claim that dead male corpses achieved erections while they were being cremated.
The following also emerged from Groening’s testimony:
1. Groening said the Red Cross visited Auschwitz and were shown around Camp 1 despite the Holocaust storytellers claiming that there was a “gas chamber’ at the entrance gates to that camp (the one still shown to tourists today);
2. That there was a brothel for prisoner use in Auschwitz Camp 1.
3. That Groening freely admitted that what knew about Auschwitz was limited to what “other people had told him.” This included his claim that the camp could “dispose’ of 5000 people every 24 hours, which he specifically said other people had told him.
4. Groening said he never saw or experienced any of the “5000 per day death process” himself, despite spending about two years at the camp.
5. That he contracted typhus from the prisoners and nearly died from the disease.
6. That he was reading from a script prepared for him, and could not remember questions asked of him only a few minutes before.
7. This prepared script was particularly relevant when it came to his account of witnessing a “gassing’ at the camp, and the fact that his account was completely different to the “gassing in crematoria bunkers’ told by the Holocaust storytellers.
8. Groening had, contrary to the English-speaking media’s reporting, said so little of significance that one of the plaintiffs in the case, alleged “survivor’ Eva Kor told the German media that “He did not really say much. I’m a little disappointed.’
The English-language coverage of the Groening trial was subjected to strict censorship in the controlled media in Britain and America, where the editors and journalists have both cherry-picked what they wanted to report and have even fabricated statements and claimed that Groening has made them in court.
Ironically, the court proceedings were much more accurately reported by the media in Germany, as exemplified, for example, by the coverage provided by the Bild newspaper. Two articles in Bild in particular covered Groening’s actual testimony in some detail, and, apart from a few sarcastic editorial insertions, have provided a completely different perspective on Groening’s “confession’ than claimed by the UK and US media. 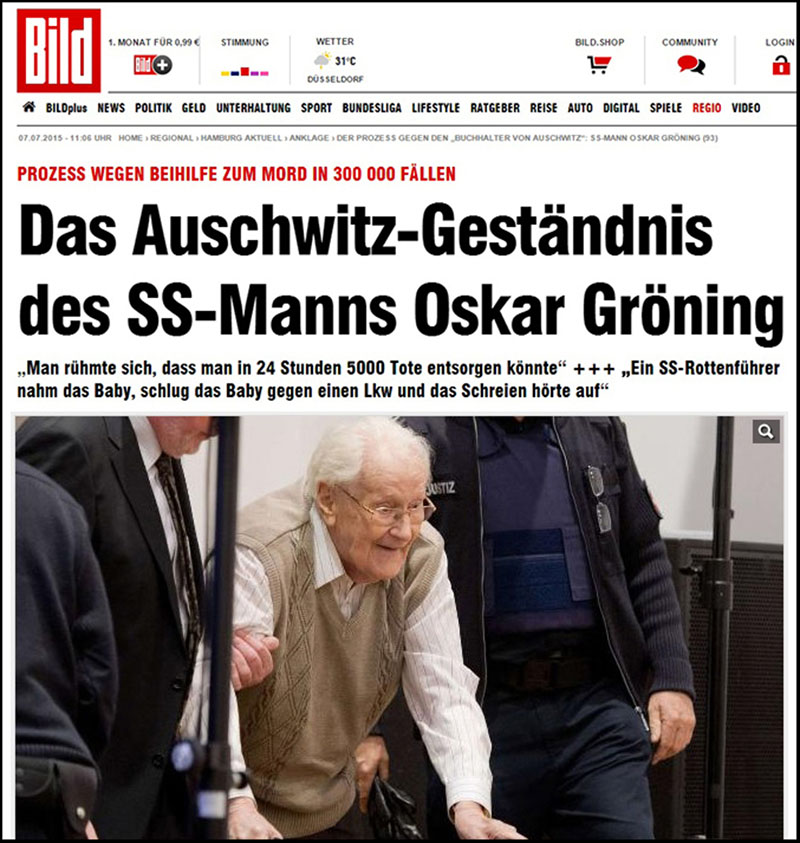 The first Bild article, titled “Das Auschwitz-Geständnis des SS-Manns Oskar Gröning” (The Auschwitz confession of SS man Oskar Groening), dated 22-04-15, contains Groening’s exact testimony regarding the “gassing’ he claims to have witnessed.
In December 1942, he had to help in the search for prisoners who escaped from the extermination camp: “Somehow, some Jews during transportation escaped.” He witnessed a gassing in a farmhouse in the forest. “That was the only time I have seen a complete gassing operation.”
“One guard poured gas into the opening, then the screams became louder, but soon quiet again.” Again he asked for a transfer” declined. “To clear this hurdle, I would have to go to Stalingrad, which was not always such an easy matter.” 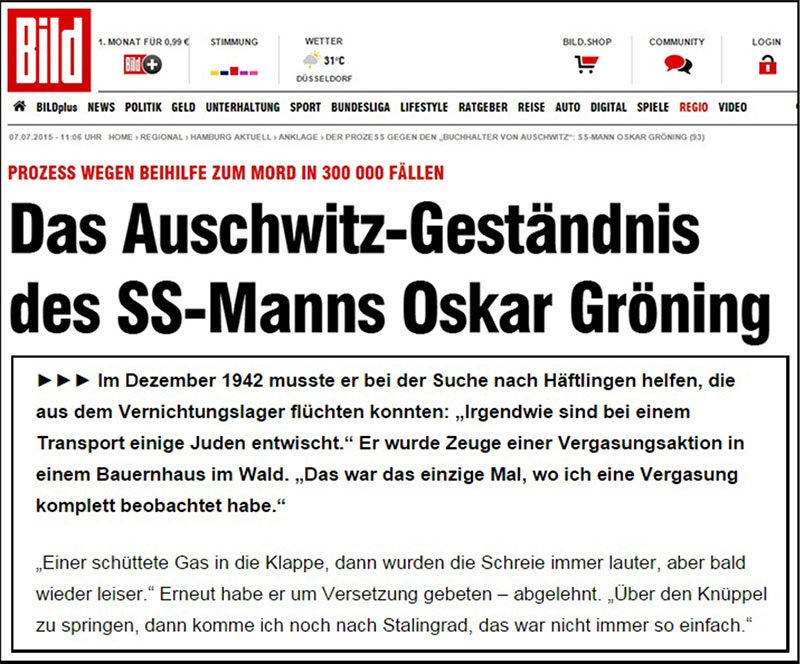 Groening’s Claims Completely Different to All Other “Eye-Witnesses” Accounts

Groening’s account differs radically from all the “eye-witnesses” and official accounts, which have claimed that the gassings were carried out in underground bunkers attached to the crematoria in Auschwitz Camp 2.
Instead, as detailed above, Groening said the gassing he witnessed took place in a “farmer’s house in the forest’” and in the middle of the night.
Firstly, although it is clear that his “gassing in a farmhouse in the middle of the nights in the forest” bears no relation to any other account, claim or eye-witness, the controlled media all over the world blindly accepted this claim as the truth, and propagated it without comment.
Holocaust Storytellers will doubtless try and claim that this “farmhouse in the forest” was one the so-called “provisional gas chambers,’ also known in Holocaust legend as the “red” and “blue” houses, or “bunker 1” and “bunker 2.” 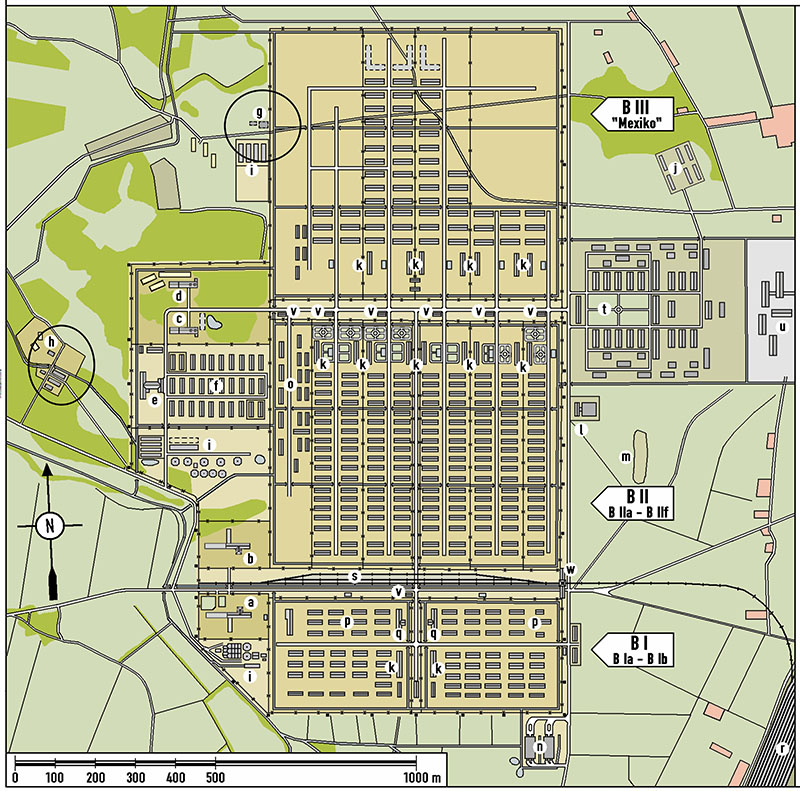 As can be seen from the “official’ map of the Auschwitz camp (above), which claims to show all the “gassing locations,” the “bunker 1” and “bunker 2” (“g” and “h” on the map below, circled) are located at the northern boundary at the western end of the Birkenau camp, and right up against the camp perimeter. Groening’s claim that the farmhouse gassing was “hidden in the forest” is therefore clearly inconsistent even with the official Auschwitz Holocaust story.
Furthermore—and this is the most telling part—Groening’s testimony in the Luneberg court room appears to be little more than a written summary of his 2005 interview with Der Spiegel magazine, titled “Der Buchhalter von Auschwitz,’ (The Accountant of Auschwitz, 09.05.2005).
According to the coverage of the trial reported by the Abendblatt newspaper, titled “KZ-Buchhalter Gröning: “Die SS galt als zackige Truppe” (Concentration Camp Accountant Groening: ‘The SS was considered a smart troop’ 21.04.15), it was here that it became obvious that Groening was just reading from a script prepared for him. As the Abendblatt said:
“Here it says killed,” he said, almost irritated with a brief look at the manuscript before him.
In fact, it seems that most of the script from which he has been reading in court, has been extracted almost verbatim from that Spiegel interview. There is however one important exception to this verbatim retelling, and that is the part which deals with the “gassing in the forest’ allegation.

The Outrageous Claims in the Groening “Confession”

In the Spiegel interview, he described the “gassing’ he witnessed as follows:
“One night, he is hauled out of bed by a whistle alarm. Jews have escaped. He runs through the darkness and come to a farm, in front of which lie dead bodies. He also sees naked people driven into the homestead. He sees a SS Squad Leader close the door, pull a gas mask over his head, open a can and dump the contents into a hatch. Then he hears screams. The cries become a roar, the roar becomes a buzz, and all becomes quiet.
“He returns to his barracks with another man, who tells him he knows a shortcut. On the way, he meets another man, who tells him what it looks like when the corpses are burned on grates. Their bodies are lined up, and the men’s penises are erect, he says.’
This account is clearly fantasy, particularly the part about the male corpses having erections as they are burned. Apart from being physiologically impossible, such a claim smacks of the very worst of the hysterical lies and outrageous claims of the Holocaust storytellers. 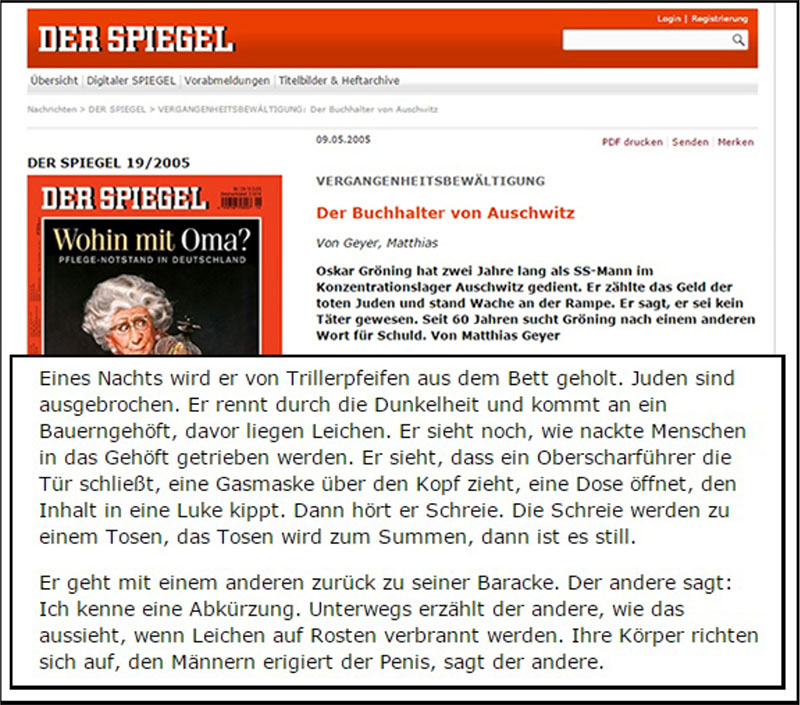 Finally, it is highly significant that Groening’s Luneberg testimony on the “gassing procedure’ was deliberately vague compared with the detailed account in the Spiegel interview.
The “erect penises while being burned on grates” claim is the most obvious reason why this part has been edited out of Groening’s new script at Luneberg.
But another reason is clearly the “fact” that, according to the Holocaust Storytellers, the “gassed Jews” at Auschwitz were cremated in industrial-scale crematoria inside Auschwitz Camp 2, and not on “grates” in the forest. Significantly, Groening spent at least two years at the camp, but somehow he never heard of the supposed “big gas chambers and crematoria” inside the camp, and instead claims only to have seen this mysterious “house” in the forest. 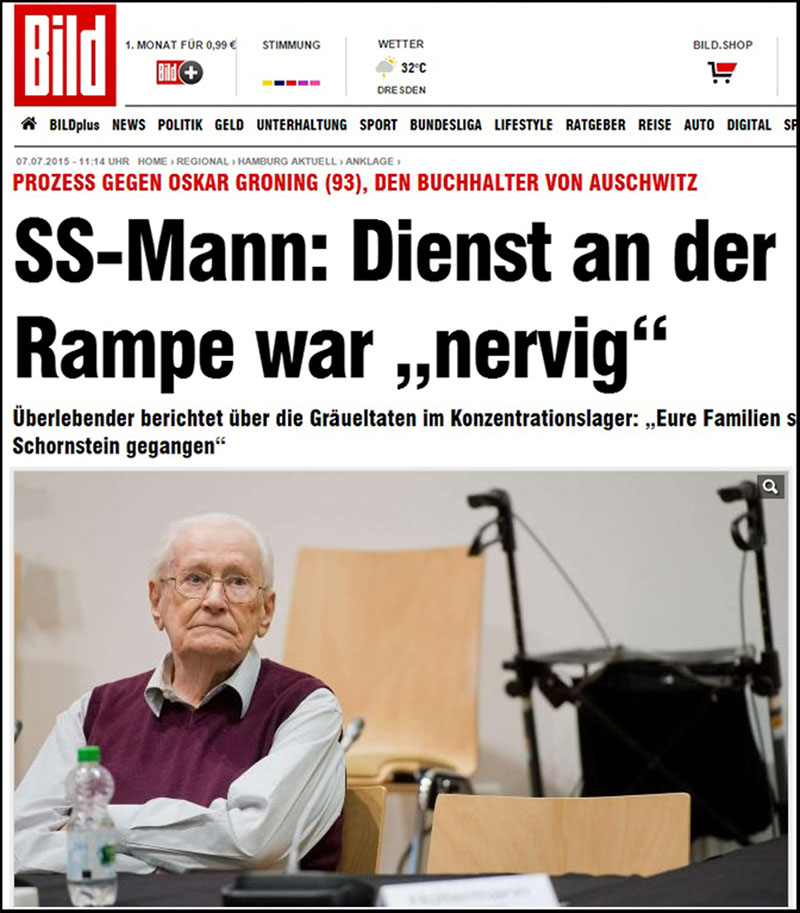 It was during this testimony that Groening accused the “eye-witnesses’ giving testimony in the court room of having exaggerated their descriptions:
Today, on the third day of the trial, the lawyers interviewed the co-plaintiffs against Oskar Groening. They wanted to elicit from him the role he has played in the extermination [process]. He said [in turn] that many descriptions of Auschwitz [as claimed by the witnesses] were “exaggerated.”
Groening’s advocate read out in court from the charge sheet, [quoting] that the “the groups of arrivals were always surrounded by guards and escape was impossible” and would have been shot at the slightest sign of resistance.
[In response] Groening said “Most of these things I can confirm, but others I have never experienced. Nevertheless, I think these descriptions have been exaggerated.”
Groening’s refusal to listen to any more testimony on Thursday April 23, 2015, for example, after being forced to hear a “survivor’ rehash the “I pulled gold teeth from dead corpses’ fake horror story, provided yet another uncomfortable moment.

The Meaning of “Entlassung”

Then came the part where, according to many media reports, Groening was supposed to have said that he “could not imagine Jews leaving Auschwitz alive.”
A close reading of the actual testimony, detailed in the Bild report, reveals that he in fact did not say this, and instead actually only said that he could “not imagine Jews being released.” The German word “entlassung” was deliberately mistranslated by the English-language mass media to mean “murdered” instead of its actual meaning, to be “released” or “laid off” (as in being laid off work).
Furthermore, the fact that Groening was reading off a prepared script became obvious once again when the judge asked him a question not related to the prepared manuscript, as the Bild reported:
Question: “Could you imagine at the time that the Jews ever could get out alive from the camp and could have descendants?”
Groening hesitated for a long time, and then conferred with his lawyers. Then [he said]: “Now I have unfortunately forgotten your question.”
The reference to “entlassung” follows, here in the original German followed by an English translation:
Wieder bespricht er sich mit seinen Anwälten. Schließlich sagt er: „Ich konnte mir nur vorstellen, in Auschwitz 1 sind Entlassungen getätigt worden.“
Frage: „Auch Entlassungen von Juden?“
Antwort: „Nein.“
Nachfrage: „Konnten Sie sich das vorstellen?“
Gröning: „Nein, ich konnte mir das nicht vorstellen.“
Again he conferred with his lawyers. Finally, he said: “I could only imagine in Auschwitz 1 that releases were made.”
Question: “Even Entlassungen of the Jews?”
Answer: “No.”
Another question: “Could you imagine that?”
Groening: “No, I could not imagine that.”
In other words, Groening actually said that he could NOT imagine Jews being released in Auschwitz: and not that he could not imagine Jews being killed there —which is precisely the opposite of how most English-language media outlets presented the exchange.

From the above it can be seen that Groening’s ridiculous claims about “erect penises” on “dead men being cremated on grates” after being gassed in a “farmhouse hidden in the woods in the middle of the night” are clearly invented.
The “gassing in the forest” is clearly a fiction developed in his Groening’s own mind, brought on by who knows what psychological impulse.
Once caught up in the story, Groening was left with little alternative to follow the “don’t-deny-it-happened-but-I-was-not-involved” type confession, the sort of which is detailed in Chapter 8 of this book (“The Psychology of Confessions”).
It was a dangerous game which ultimately saw him sentenced to four years in prison —on the basis of a claim which was clearly untrue.